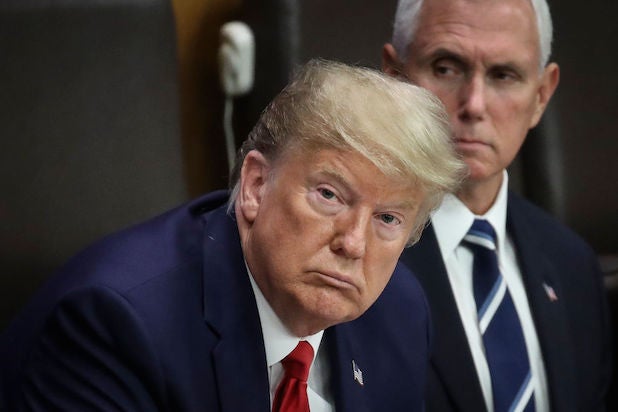 The president’s page has run nearly 2,000 ads in the last week mentioning impeachment, according to a review of Facebook’s ad library on Monday. Many of the ads call on supporters to join President Trump’s “official impeachment defense task force,” which, after users enter their email and phone number, directs them to a contribution page on the president’s website.

“As a member of the Official Impeachment Defense Task Force, you will be a leader in defending me, the President, against these baseless and disgusting attacks,” read one ad running on Monday. “You will be responsible for defending American Greatness.”

Another Trump ad claims Democrats “thrive on silencing and intimidating” his supporters. “They want to take YOUR VOTE away,” the ad continued.

At the same time, Trump’s ad spending has sharply increased in the last week, with nearly $1.1 million spent; during the preceding three weeks, the president’s Facebook page spent about $300,000 on ads. (It’s worth noting the president has spent more than anyone else on political ads since the social network started tracking political ads in May 2018, with about $18 million dropped on Facebook ads.)

More glaringly, Vice President Pence’s Facebook page has went from dormant to overdrive as Democratic calls for impeachment grow louder. Pence’s Facebook page has spent $703,000 in the last week on ads, or about three times the amount his page spent on ads during the previous 15 months.  The ads on Pence’s page mirror the same ones running on Trump’s page, and are also paid for by the Trump Make America Great Again Committee.

As the New York Post pointed out this past weekend, the impeachment inquiry has turned into a cash cow for both Republicans and Democrats. Eric Trump boasted last Friday the inquiry had spurred 50,000 donors to sign up — and helped bring in $15 million in contributions.