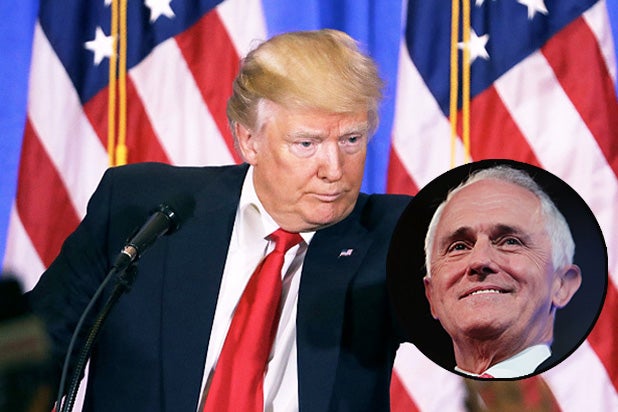 What should have been a civilized conversation between two world leaders got heated when President Trump blasted the Australian leader over an agreement forged under President Obama for the U.S. to accept up to 1,250 refugees detained in Australia, the Washington Post reported Wednesday. In addition, senior U.S. officials told the paper that the president bragged about the size of his electoral college victory.

The call should have lasted up to an hour, however President Trump cut it short after just 25 minutes, according to the Post.

Australia has long been an ally to the United States, however Trump told Turnbull that their exchange was the fifth call he’d had that day (including one with Russian leader Putin) and “this was the worst by far,” per the paper

Hours after the Post story broke, Trump took to Twitter to tweet another provocative comment about the longtime ally: “Do you believe it? The Obama Administration agreed to take thousands of illegal immigrants from Australia. Why? I will study this dumb deal!”

Do you believe it? The Obama Administration agreed to take thousands of illegal immigrants from Australia. Why? I will study this dumb deal!

And as the Aussies would say, the Twitterverse went off like a frog in a sock.

“Who’d have thought it was possible to blow the US-Australia relationship? It’s childproof. But not Trumpproof,” marveled New York Times columnist Nicholas Kristof.

See some of the most outraged and amusing tweets below.

That call to Australia really did not go well pic.twitter.com/yHLdymOke4

I think Australia got the news pic.twitter.com/NSBmXi7JHs

Trump insulted or undermined our allies in Australia, Germany, Britain & Mexico. So far.

But that Mr. Putin fellow? He looks mah-velous.

Who'd have thought it was possible to blow the US-Australia relationship? It's childproof. But not Trumpproof. https://t.co/r2rOtESKRV

I had Australia in my office pool.

Donald Trump only started a fight with Australia because he heard from a trusted friend that's where Hitler grew up.

Girl, am I Australia, because after a long day, you just yell at me.

Dear Australia: we're sorry about the orangutan who hijacked our country. Please know that 65+ million of us are Team Aussie on this one ✌️️ pic.twitter.com/DsJXtEqDHo

Australia?! You can't even be nice to Australia?! @POTUS #Australia pic.twitter.com/hPNwxwtyBH

We're picking fights with AUSTRALIA!!!????? What the holy hell https://t.co/EAyPPUt1W7

I made a Top 100 Possible Trump Administration Foreign Crises list & I gotta admit "Rupturing US-Australia Relations" was NOT on there.

(Actually, this is the backstory to Mad Max)