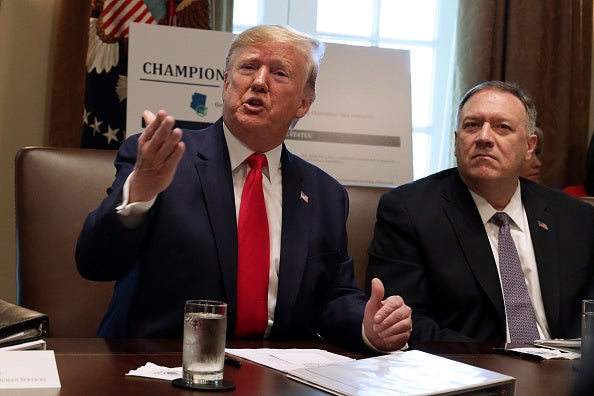 During a Tuesday press conference, President Donald Trump lauded Secretary of State Mike Pompeo for his attacks on an NPR journalist.

“That was very impressive, Mike,” Trump said after Pompeo received an ovation during an announcement about the administration’s Middle East peace plan alongside Israeli Prime Minister Benjamin Netanyahu at the White House. “That reporter couldn’t have done too good a job on you yesterday, huh? I think you did a good job on her, actually,” the president said.

Pompeo lashed out at NPR’s Mary Louise Kelly on Saturday and accused her of lying about a heated encounter after an interview, saying she “chose to violate the basic rules of journalism and decency.”

“NPR reporter Mary Louise Kelly lied to me, twice. First, last month, in setting up our interview and, then again yesterday, in agreeing to have our post-interview off the record,” Pompeo said in a statement Saturday. “It is shameful that this reporter chose to violate the basic rules of journalism and decency. This is another example of how unhinged the media has become in its quest to hurt President Trump and this Administration.”

In the referenced interview, which aired Friday on “Morning Edition,” Kelly asked Pompeo several questions about the Ukraine scandal that led Congress to impeach President Trump. Pompeo repeatedly declined to answer her questions and, at one point, said he had only agreed to speak about Iran. Kelly replied that his staff signed off on questions about both Iran and Ukraine.

Later Friday, Kelly said Pompeo berated her in his private living room, using the F-word, and asking if she thought Americans cared about Ukraine before asking her to identify Ukraine on an unmarked map, which she said she did.

On Monday, Michele Kelemen, who is also with NPR, was notified that she was being removed from the press pool covering Pompeo’s upcoming trip to the United Kingdom, Ukraine, Belarus, Kazakhstan, and Uzbekistan.

Trump’s praise of Pompeo came hours after he lambasted Fox News for booking Democratic lawmakers on its shows, rounding out a full day of media criticism for the president.

Trump to Mike Pompeo on NPR: “That was very impressive, Mike. That reporter couldn’t have done too good a job on you yesterday, huh? [laughter] Think you did a good job on her, actually. [laughter] That’s good.” Via CSPAN pic.twitter.com/OQDR6IS2T8