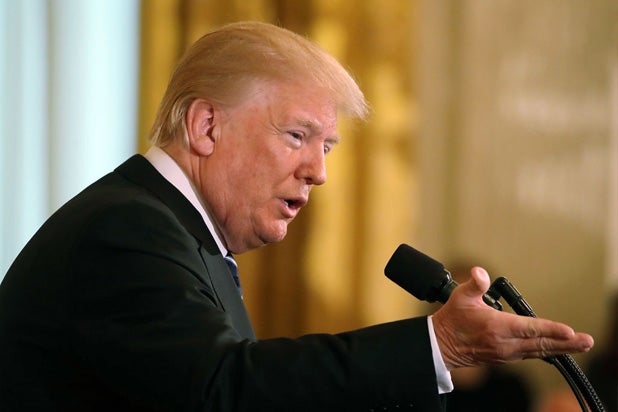 President Donald Trump promised to “look into” Twitter’s practice of “shadow banning” after a report from Vice News on Wednesday accused the company of suppressing the accounts of prominent Republicans.

“Twitter “SHADOW BANNING” prominent Republicans. Not good,” he said. “We will look into this discriminatory and illegal practice at once! Many complaints.”

Twitter “SHADOW BANNING” prominent Republicans. Not good. We will look into this discriminatory and illegal practice at once! Many complaints.

As perhaps the platform’s most prominent American conservative user, the matter is of close interest to Trump, whose early morning tweets often set the tone of a full day’s news cycle.

“So glad people are getting involved fighting this nonsense,” Trump Jr said. “I can’t tell you the number of small accounts and small business social accounts that have said they’re getting hit by these bans simply for being conservative leaning.”

So glad people are getting involved fighting this nonsense. I can’t tell you the number of small accounts and small business social accounts that have said they’re getting hit by these bans simply for being conservative leaning. https://t.co/aRQ8FJ0hOD

Also Read: Twitter Responds to Shadow Banning Outcry: 'We Have a Lot More Work to Do to Earn People's Trust'

On Wednesday, Vice News published a report saying that shadow banning of conservative voices was real on Twitter and that the company was not taking any similar action towards liberals. According to Vice, the issue took the form of several prominent Republicans not auto-loading in the platform’s search bar, which made their profiles harder to see for average users.

The charge of Twitter shadow banning has been old news in conservative media where the phenomenon has been widely reported on.

In a statement yesterday, Twitter founder and CEO Jack Dorsey repeated the company’s longstanding denial that they engage in shadow banning, but conceded that, his company needed to do better.

“We have a lot more work to do to earn people’s trust on how we work,” said Dorsey in a tweet yesterday.

In a lengthy explanation, Twitter product lead Kayvon Beykpour said the issue was not caused by shadow banning, but by a “machine learning” snafu designed to suppress accounts that were not “healthy” for the platform — one which seemingly only targeted conservatives.

“In May, we started using behavioral signals and machine learning to reduce people’s ability to detract from healthy public conversation on Twitter. This approach looks at account behavior and interactions with other accounts that violate our rules,” he explained.

“Some accounts weren’t being auto-suggested even when people were searching for their specific name. Our usage of the behavior signals within search was causing this to happen & making search results seem inaccurate. We’re making a change today that will improve this.”