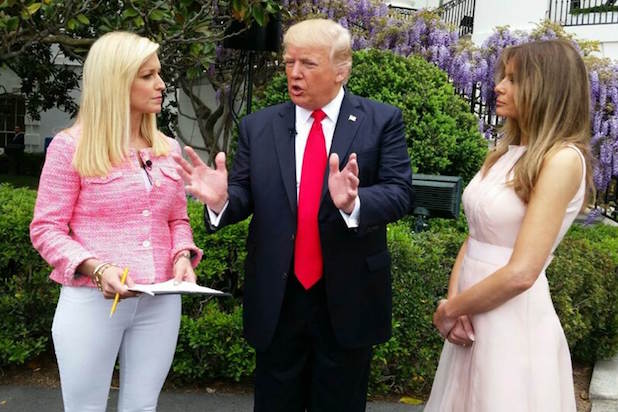 President Trump slammed former presidents Bill Clinton and Barack Obama for telegraphing plans instead of catching foreign leaders off guard, saying, “I’m not like other administrations.”

“I don’t want to telegraph what I’m doing or what I’m thinking. I’m not like other administrations, where they say we’re going to do this in four weeks. It doesn’t work that way,” Trump told “Fox & Friends” co-host Ainsley Earhardt when she asked whether he has ruled out a military strike against North Korea.

Earhardt spoke with Trump and First Lady Melania at the White House’s Easter Egg Roll on Monday for an interview that will air Tuesday morning on Fox News.

Trump continued: “We’ll see what happens. I hope things work out well. I hope there’s going to be peace, but they’ve been talking with this gentleman for a long time. You read [Bill] Clinton’s book and he said ‘Oh, we made such a great peace deal’ and it was a joke. You look at different things over the years with President Obama. Everybody has been out played. They’ve all been outplayed by this gentleman and we’ll see what happens. I just don’t telegraph my moves.”

Trump took to Twitter early on Monday morning to rip the “not real media,” calling it “fake” and writing, “Every story is badly slanted. We have to hold them to the truth!” The president has slammed the media on a regular basis, often referring to the industry as the “opposition party.”

However, he did take the time to praise Fox News’ morning show “Fox & Friends” shortly before he accused the media of getting “worse” since Election Day.