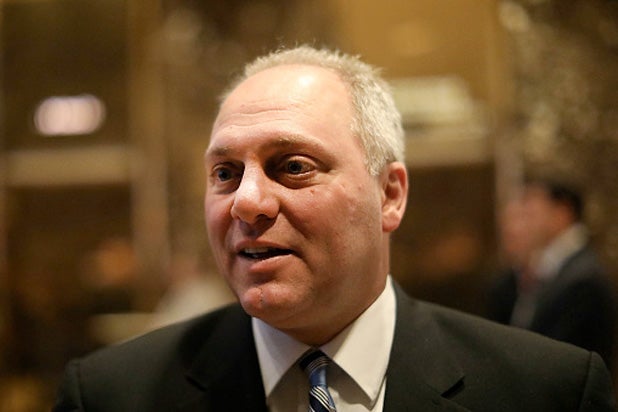 President Donald Trump offered prayers on Wednesday morning for House Majority Whip Steve Scalise, who was shot in the hip during a Congressional baseball practice event in the Washington suburb of Alexandria, Virginia.

“Rep. Steve Scalise of Louisiana, a true friend and patriot, was badly injured but will fully recover,” Trump tweeted shortly after the attack was reported. “Our thoughts and prayers are with him.”

Rep. Steve Scalise of Louisiana, a true friend and patriot, was badly injured but will fully recover. Our thoughts and prayers are with him.

On Wednesday morning, a gunman opened fire with a rifle on a group of Republican politicians practicing for the upcoming Congressional baseball game, striking Scalise and several others.

Scalise is in stable condition with a “hip wound” at George Washington University Hospital, according to the Associated Press. House Speaker Paul Ryan’s spokesperson said Scalise’s wounds were not believed to be life-threatening.

Police said a suspect in the shooting was in custody.

Rep. Mo Brooks witnessed that attack and told the AP that several other people also were hit, including two law enforcement officers. Brooks also told CNN that at least 50 rounds were fired.