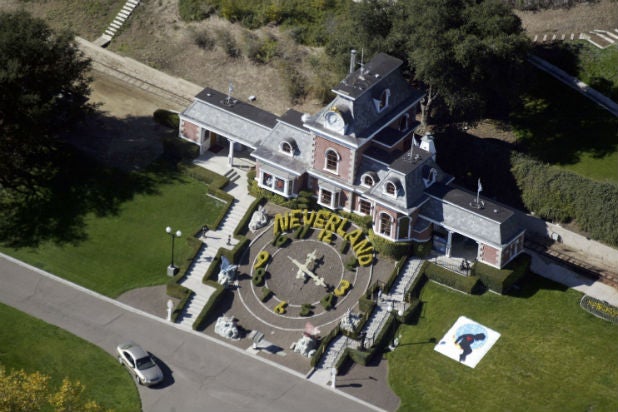 The famous ranch at the center of “Leaving Neverland” is for sale — but the property’s current owner, and his decision to sell it now, only add to the strangeness surrounding Michael Jackson’s longtime home.

Tom Barrack, a close Trump ally, and his Colony Capital Inc., bought Neverland from Jackson in 2008, less than a year before Jackson died. The company announced plans to sell it (again) on Friday, just before HBO debuted “Leaving Neverland,” which details accusations from two young men that Jackson sexually abused them there.

Laura Kalb, a real estate agent at Hilton & Hyland, whose company had the property co-listed with Sotheby’s International Realty in 2015, told TheWrap that she doesn’t foresee the documentary hurting the value of the property. In fact, she said, the documentary may attract buyers.

Additionally, she said, the price tag of $31 million is a “bargain,” and she doesn’t believe there will be a stigma associated with Jackson.

“It is a bargain,” she said. “I don’t think it didn’t sell because of Michael [in the past], it’s just in the middle of a very rural area. We sell $100 million properties in our company a lot, and sometimes they go quickly and sometimes they take a while like this one — so Neverland isn’t out of the ordinary.”

After Colony Capital bought Neverland in 2008, Neverland went into an LLC called Sycamore Ranch Company, LLC, according to an individual with knowledge of the property. There were multiple parcels, but no price tag was disclosed.

The 2,700-acre estate, which Jackson purchased for under $20 million in 1988, is surrounded by rolling wine country, about 100 miles northwest of Los Angeles. Jackson famously added exotic animals, an amusement park, two trains and Peter Pan tributes. Jackson’s molestation trial in 2005 revealed that a juke box in the arcade concealed a wine cellar. He filled some rooms with dolls and mannequins dressed as super heroes and film stars.

After 2005 and his acquittal on the molestation charges — which involved two different accusers than the ones in the documentary — Jackson was plagued by financial troubles. In 2007, he defaulted on the loan on Neverland. The Los Angeles Times reported that a foreclosure auction was cancelled when Colony Capital bought the loan for an estimated $22.5 million. Colony Capital then embarked onto a joint venture with Jackson’s estate, according to the Wall Street Journal.

After Jackson’s death, Colony Capital stripped the property of the amusement park and its menagerie of animals. According to Forbes, Colony spent more than $50 million improving the estate.

It also renamed it Sycamore Valley Ranch, presumably in an attempt to distance it from the name given to it by Jackson in honor of Peter Pan, the boy who wouldn’t grow up.

‘This TRULY is a once-in-a-lifetime opportunity to own one of the most pristine 2,700-acre ranches in Southern California with total privacy and wildlife galore,” Compass listing agent Suzanne Perkins said in a statement to TheWrap. “Having sold many of the largest ranches on the south coast in Santa Barbara County, I can easily say without hesitation that this is one of the more spectacular ranches in so many different ways.”

Barrack is a private equity real estate investor and the founder and executive chairman of Colony Capital Inc., as well as a close friend of Trump’s who served as a senior adviser during the 2016 campaign. He also served as the chairman of the Presidential Inaugural Committee.

Colony Capital was at one point planning to provide an emergency infusion of cash to The Weinstein Company and potentially acquire the company, but backed out.

“Leaving Neverland,” a four-hour, two-part documentary by Dan Reed, features extensive interviews with Wade Robson and James Safechuck, who say Jackson molested them when they were underage.

The Jackson estate has vehemently opposed the documentary, calling it “the kind of tabloid character assassination Michael Jackson endured in life, and now in death.”