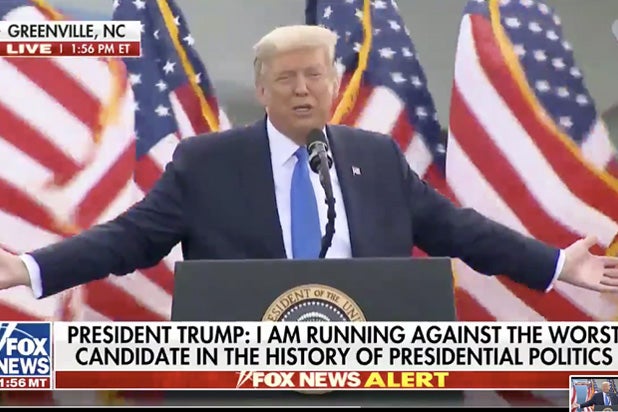 President Trump ripped into NBC and a slew of journalists in anticipation of tonight’s town hall, saying that he’s “being set up” and accusing the network’s parent company, Comcast, of pulling a “con job” on him.

“I’m being set up tonight, right? So I’m doing this town hall with Concast — C O N, right? CON, cause it’s a con job,” he said in a speech from Greenville, North Carolina that aired live on Fox News on Thursday.

Then he took a moment to tear into his opponent, former Vice President Joe Biden.

“They gave Joe Biden, a week ago, a town hall, and it was meant for children. In fact, speaking of Barron Trump — fully recovered in record time — Barron Trump would do great on that show because he’s a young child,” he continued. “They ask him questions that a child could answer — any child, a smart child, not such a smart child — and they got taken apart, you know, it was a joke.”

Then Trump set his sights back on tonight’s town hall, which is scheduled to overlap with Biden’s own event on ABC. The move has drawn much ire from liberals over the past 24 hours, including from former NBC News executive Cheryl Gould, who said she was “dismayed” and “disgusted” over NBC’s participation.

“They asked me if I’d do it, and I figured, what the hell, we got a free hour of television,” he said.

He also trashed “Today” host Savannah Guthrie — “She’s always lovely, isn’t she?” he said sarcastically as boos erupted from the crowd — and ABC News chief anchor George Stephanopoulos: “His questions were unfair,” he said of their recent interview.

Then he went for one of his favorite topics: “The Fake News Media.”

“The Fake News Media is corrupt. Okay? It’s corrupt. And they’ve shown it so many times,” he said.

Watch the full clip below.

This is how Trump is previewing his town hall: "You know, I'm being set up tonight. I'm doing this town hall with Concast – C O N, right – CON – cuz it's a CON JOB. Concast. C O N. Not C O M. CONcast. So I'm doing it, and it's NBC, the worst…" pic.twitter.com/niVBuTin0e