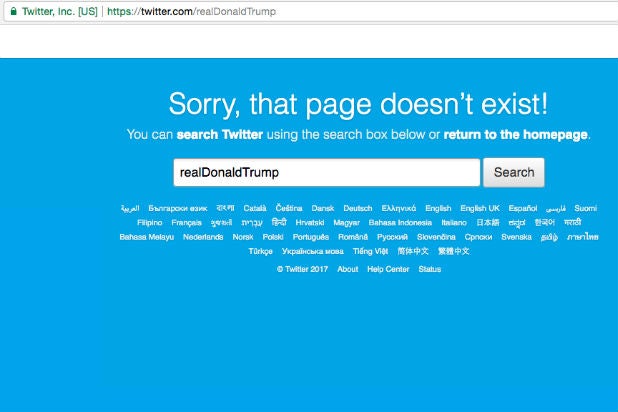 Twitter initially attributed the surprise deactivation of President Trump’s Twitter account on Thursday to “human error,” but as it turns out, the deletion was one employee’s memorable way of burning bridges on their way out the door.

The company clarified Thursday night that the culprit behind the deactivation was “a Twitter customer support employee who did this on the employee’s last day.” The company says that a “full internal review” is under way — which probably means customer service workers can expect the ability to delete a PTOTUS (President’s Twitter of the United States) to be revoked permanently.

Through our investigation we have learned that this was done by a Twitter customer support employee who did this on the employee’s last day. We are conducting a full internal review. https://t.co/mlarOgiaRF

The @realDonaldTrump account went down around 3:50 p.m. PT on Thursday afternoon. Users attempting to view Trump’s profile were met with a “Sorry, that page doesn’t exist!” message, leading some to wonder whether the account had been suspended, deleted voluntarily, or if they were experiencing some kind of technical glitch.

The account was back up within 11 minutes but for those few moments, Americans on both sides of the aisle were united by a shared lack of worry about what Trump might tweet next.

How much better was the world for the few minutes that Trump's Twitter was offline?

*Unnamed American Hero who’s last day was today, Twitter is investing how someone could have let this legend go.. fixed it for you!

Someday we need to build a monument to The Unknown Badass. pic.twitter.com/is9hQImmFB

everyone’s been wondering what hillary would do after 2016. no one guessed mid-level twitter employee pic.twitter.com/uiUtvBq991