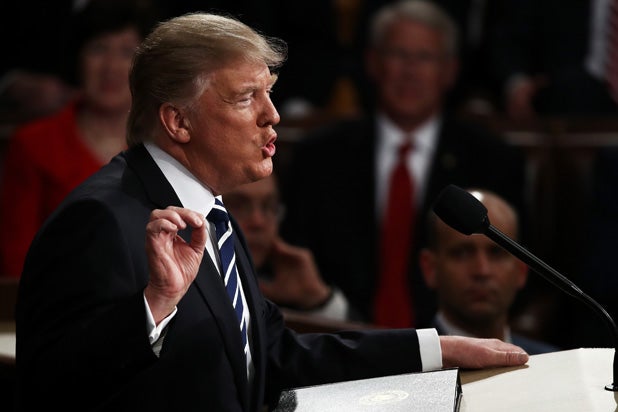 Donald Trump gave his first address to a joint session of Congress Tuesday night. The speech hit all his big policy goals, including repealing and replacing the Affordable Care Act, increased vetting of immigrants cracking down on crime and introducing a catchy new government acronym, VOICE (for Victims Of Immigration Crime Engagement).

As reporters raced to check Trump’s facts, Twitter lit up with reactions to the speech and the responses from the live audience.

Democrats notably stayed seated throughout Trump’s remarks, while Republicans were on their feet and applauding after every few sentences.

Needless to say, a lot of the reviews from Hollywood stars were far from flattering, especially from those who noted how Trump read the scripted speech from a teleprompter.

Pay attention: "Access to healthcare" is not healthcare. I have "access" to Ryan Reynolds. But he's not covering me.

Who's the boob reading #PresidentBannon's speech?

Trump paints very bleak picture of country he inherited. Fascinating compared to one Obama described in his outgoing speech. #JointAddress

Now the lying begins w/ his "jobs" creation since Jan20. Please-is there a network who'll run a crawl w/ the facts @ the bottom of screen?

A Great Great Wall? What the hell?

Trump says he’ll ‘speak from the heart’ during his first speech to Congress. And Melania will speak from Michelle Obama’s.

The Democrats probably aren't standing because their feet are so sore from all the marching. #DontGetTrumped #JointAddress

Of course, Charlie Sheen had a very “unique” view of the POTUS’ speech.

blowz my mind,
that the world
is on pins & needles,
salivating
to suffer the drivel
from a simpleton,
Ho-ass piglet fraud
like you.
© pic.twitter.com/FSNKuVKDYM

Comedian John Hodgman had a tough time when Trump misspoke the word “anniversary.”

Recent stories that pinned down what news shows Trump has been watching right before tweeting were top-of-mind too.

How does Trump know what Lincoln said? Was he on Fox and Friends this morning?

The folks running the Twitter account for “Jessica Jones” appeared to be watching the speech — and not really enjoying it.

Sorry, I can't hear what you're saying over all the stupidity coming out of your mouth.

And frequent cuts to Democrats in the audience seemed to be begging for some intervention.

Quite a few people had up-to-the-moment fact checks ready to go.

When Trump says 94 million Americans are out of the labor force. #JointAddress https://t.co/4wP1AkJ1Vo pic.twitter.com/aRnZolHC88

On average there are nearly 12,000 gun homicides/year in US.

Likelihood of a dying in a terrorist attack by a foreigner: 1 in 3.6 million.

Notice: Trump no longer claims that Mexico will pay for the wall. He's been silent on this since the phone call with the Mexican president.

President Trump is talking about giving people acesss to Medicaid. Ryan wants to block grant the program and is still clapping.

When reactions weren’t factual, they were emotional. Trump discussed harsher moves against illegal immigrants and doubling down on fighting “radical Islamic terrorism.” Supreme Court Justice Elena Kagan’s face summed up a lot of feelings for many people watching.

As did Sen. Al Franken’s face.

Many didn’t think too highly of Trump’s announcement about the formation of Voices Of Immigrant Crime Engagement, or VOICE.

Comparisons to past addresses also leapt to many minds. When Trump mentioned that Americans would aspire to visit other planets in the future, it reminded of one of George W. Bush’s science-related statements.

Nothing Trump says tonight will be as crazy as the time George W Bush used his State of the Union to put mad scientists on notice. pic.twitter.com/QLpo4Mfksn

At least one person was very impressed by Trump’s speech.

That. Was. A. Grand. Slam. #Jointsession

And some people anticipated how pundits would react when it was all over.

"Tonight the president only said immigrants were bad eleven times and never once said the media were cancerous. He's made it"

But maybe the best reaction was the one people retweeted from the man himself, circa one year ago.