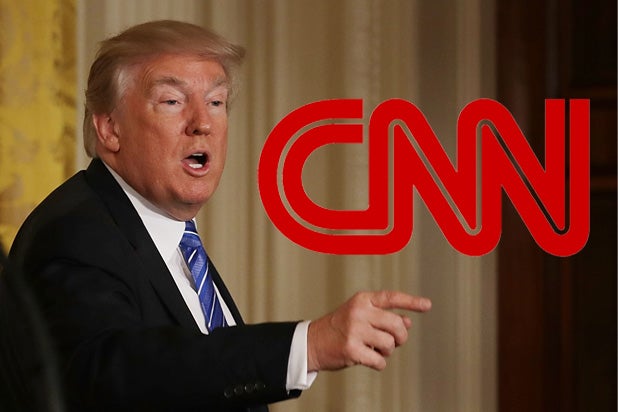 President Trump continued his run of bizarre Twitter behavior on Sunday, tweeting a right-wing video meme that imagined himself body-slamming and pummeling a man with a CNN logo for a head.

The footage — a grainy mirror image of a scene from a 2007 WrestleMania stunt involving Trump and WWE CEO Vince McMahon — shows a pink-tie-wearing Trump essentially jumping a suited figure on the side of a wrestling ring, tossing him to the ground and then punching him in the face before walking away in triumph.

In the altered video clip which has become an online meme, a CNN logo has been floated over McMahon’s head.

And the president added the caption: “#FraudNewsCNN #FNN”

The original 2007 stunt led to a match between McMahon and Trump in which the loser was forced to shave his head on camera. You can guess who won that contest.

“It is a sad day when the President of the United States encourages violence against reporters,” a CNN spokesperson responded early Sunday. “Clearly, Sarah Huckabee Sanders lied when she said the President had never done so.”

This was a reference to the deputy White House press secretary’s comment at a Thursday press briefing that: “The President in no way form or fashion has ever promoted or encouraged violence. If anything, quite the contrary.”

The CNN spokesperson continued: “Instead of preparing for his overseas trip, his first meeting with Vladimir Putin, ‎dealing with North Korea and working on his health care bill, he is involved in juvenile behavior far below the dignity of his office. We will keep doing our jobs. He should start doing his.”

Also Read: Donald Trump May 'Cherish Women' But Pays Them a Lot Less

Since Thursday, when he launched into a graphic ad hominem Twitter attack on MSNBC hosts Mika Brzezinski and Joe Scarborough, Trump has used his Twitter account in an increasingly aggressive manner to mock mainstream media outlets and other political critics.

On Saturday morning, he fired off a series of tweets at his favorite targets, bashing CNN, NBC and MSNBC “Morning Joe” hosts Mika Brzezinski and Joe Scarborough.

In late afternoon, he resumed his Twitter tirade Saturday, insisting his “use of social media is not Presidential – it’s MODERN DAY PRESIDENTIAL.”

Online reaction has been swift.

"The President in no way form or fashion has ever promoted or encouraged violence. If anything, quite the contrary." – @SHSanders45 6/29/17

"The President in no way form or fashion has ever promoted or encouraged violence." -@SarahHuckabee

This. Nothing about this is humorous. It's chilling. We are watching the leader of the free world in he grips of a psychotic break.

President Obama was black. If he posted such a vid @realDonaldTrump supporters would call it thuggish and stupid, because, you know, black.

Presidential intimidation of the press is censorship: it violates the 1st amendment directly.