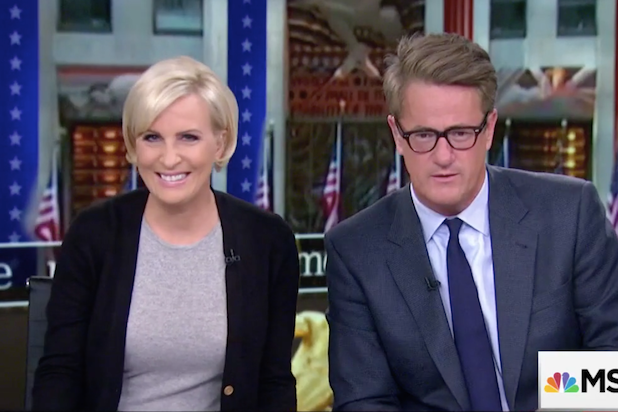 For all of 2019 through Tuesday, which is all of the year-to-date data we currently have available from Nielsen, “Morning Joe” is up 10 percent compare to the first quarter of 2018. Meanwhile, Fox News and CNN’s morning shows are down 5 percent and 7 percent, respectively, year over year.

This is the 16th straight quarter that “Morning Joe” will beat CNN’s “New Day” in viewers. The MSNBC morning show is also beating CNN in the key adults 25-54 demographic, marking the seventh-straight quarter for that claim.

On Thursday, Trump tweaked his former cheerleaders Joe Scarborough and Mika Brzezinski. “Wow, ratings for ‘Morning Joe,’ which were really bad in the first place, just ‘tanked’ with the release of the Mueller Report,” he said in an early morning tweet.

While “Morning Joe” ratings are down so far this week versus last, it’s hard to justify that they’ve “tanked.” This Monday and Tuesday, the first two shows since Attorney General William Barr released the first findings of special counsel Robert Mueller’s investigation, “Morning Joe” averaged 997,000 total viewers. Last week, it averaged 1.1 million — a decline of 12 percent.

Trump made other ratings claims in his Thursday tweet: “Likewise, other shows on MSNBC and CNN have gone down by as much as 50%. Just shows, Fake News never wins!”

Trump didn’t cite specific numbers or say which shows had suffered a 50 percent drop-off, but he may have been obliquely referring to a widely shared piece in the Daily Beast citing ratings concerns at MSNBC now that the Trump-Russia collusion narrative was on ice. There was also an Associated Press story published Wednesday showing a sharp ratings drop-off for Rachel Maddow in the days following delivery of the Mueller report.

Per Nielsen ratings, not one MSNBC show is down 50 percent following the Mueller release, though recent primetime shows have experienced declines hovering around that huge number on a year over year basis. CNN also has sizable drops — particularly on a March 2018 vs. March 2019 basis — but we do not see any version of declines approaching 50 percent.