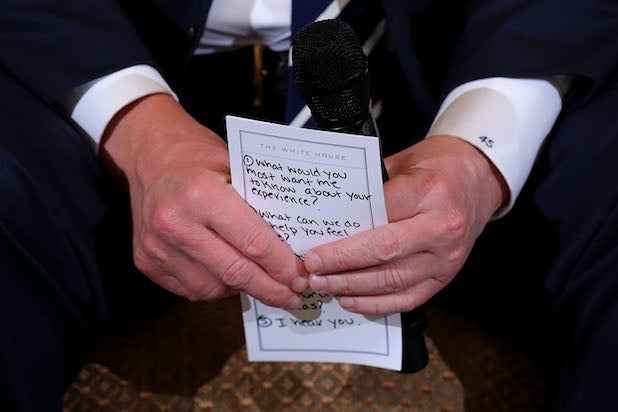 Donald Trump held a listening session Wednesday afternoon with parents, teachers and students affected by school shootings over the past two decades, and he prepared some talking points for the meeting.

In a photo tweeted out by the Associated Press, Trump held some notes written in sharpie on White House card stock. Some of the points are obscured by his hands, but you can see some reminders, including “What would you most want me to know about your experience?” and “What can we do to help you feel safe?”

The fifth point on the note was “I hear you.”

Several on Twitter responded to the photo, finding the president’s apparent need for a reminder to be empathetic “pathetic.”

“Pretty sad he needs to be told to say this,” one user commented, adding a zoomed in photo of that fifth point.

“Isn’t that pathetic???” another user said.

Also Read: Florida Shooting Survivor David Hogg Strikes Back at Right-Wing Trolls: 'I Am Not a Crisis Actor'

“I was going to say… Having notes doesn’t seem out of the ordinary (probably). But needing a note to show empathy? Dang,” added another.

The president also drew criticism for saying at the meeting that he is considering arming teachers with concealed guns.

“Absolutely asinine that the solution to the problem of gun violence is…more guns! In what realm of logic does that make any sense?” asked one Twitter user. “This s–show Trump roundtable is just that- a damn s–show. Did the NRA sponsor this? Did they hand out talking points? Unbelievable.”

For more reaction, head over here.