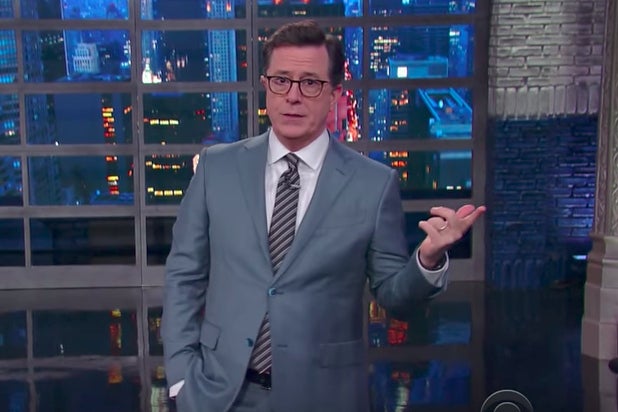 Stephen Colbert on 'The Late Show'

Finally, we’ve found something that the Trump administration is poor at. No, it’s not leading a nation (though, that too) — we’re talking about pretty simple math.

“It turns out the entire budget is based on a $2 trillion math error,” Stephen Colbert said Wednesday of the White House’s financial plan for 2018.

He added: “There’s a simple explanation for how this happened: Donald Trump is an idiot — or he’s lying.”

The CBS host explained away Trump’s team double-counting $2 trillion in tax cuts as economics of the “trickle-down” variety — “something we know Trump loves,” he quipped.

Yes, that was a pee joke.

This whole thing is “like robbing Peter to pay Paul, but you’re paying Paul with a Blockbuster gift certificate,” Colbert continued. “It doesn’t work anymore.”

The Comedy Central alum’s monologue was pretty damning for sure, but the harshest take on Trump’s budget came from someone who actually understands the Generally Accepted Accounting Principals, or GAAP.

Former Secretary of the Treasury Larry Summers called the mathematical blunder “a logical error of the kind that would justify failing a student in an introductory Economics course.”

Ouch. Watch the video above.