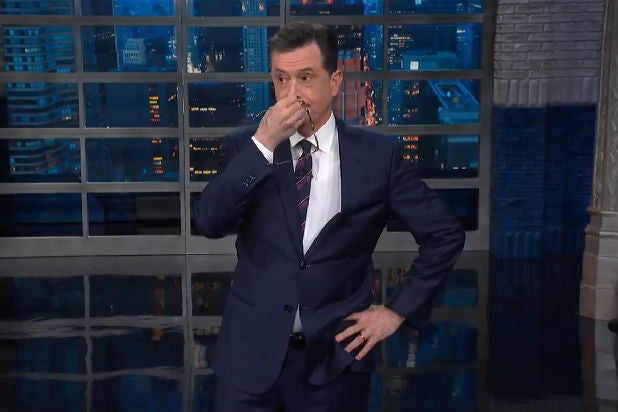 On Tuesday’s “The Late Show,” Stephen Colbert became a bit nostalgic for the Obama years thanks to President Trump’s debunked claim that the policy of separating migrant children from their parents at the border was started by the Obama Administration.

On Tuesday, Trump told reporters in the White House that “President Obama had child separation. Take a look — the press knows it, you know it, we all know it. I’m the one that stopped it.” NPR found that the Obama administration did not have such a policy, though the Los Angeles Times said that separations were allowed under Obama when parents were deemed a threat to their children or had criminal convictions.

“Obama didn’t have a family separation policy, remember? It was announced as a change of policy by Jeff Sessions. He called it ‘zero tolerance.’ As in your feelings towards Mexicans,” Colbert said, addressing his remarks directly to Trump.

“Don’t get me wrong. Obama’s no angel here. C’mon,” Colbert added. “I mean there is ample evidence of Barack taking kids from their parents, subjecting them to harsh interrogations, even confiscating all of their hugs!” As he said this, Colbert showed White House photos of Obama playing with children or hugging them.

Colbert then pretended to get a little choked up, and whispered “I miss you” while looking at the camera.

There’s another funny bit where Colbert mocked Trump’s assertion that undocumented immigrants are only coming to the U.S. “because let’s go to Disneyland.” Watch the whole thing below.