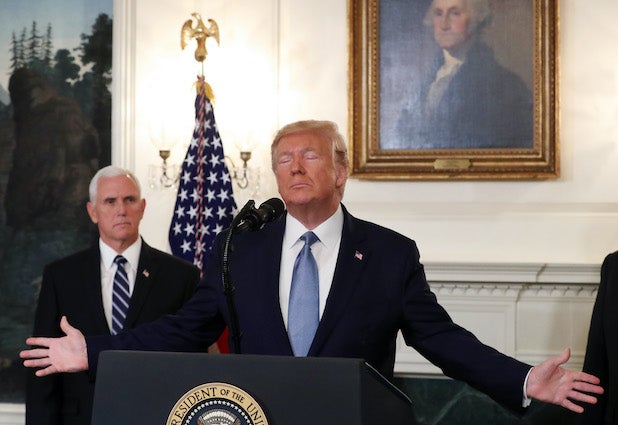 One of President Donald Trump’s lawyers argued on Wednesday that even if the president shot someone, he couldn’t be prosecuted while in office.

The statement took place during an appearance before a federal appeals court, according to multiple reports, where members of Trump’s legal team faced off with the Manhattan district attorney’s office over a subpoena of Trump’s tax returns. Trump has argued that, as president, he has immunity across the whole criminal justice process that exempts him from subpoenas and other investigations.

In countering the president’s argument, according to NBC News, the general counsel for the DA brought up an egregious example that would seemingly rebut that argument: “if, for example, he did pull out a handgun and shoot someone on Fifth Avenue.” (On the campaign trail, Trump has said, “I could stand in the middle of Fifth Avenue and shoot somebody and wouldn’t lose any voters, okay?”)

But according to Politico, attorney William Consovoy responded that Trump, while he didn’t have “permanent immunity,” could only be prosecuted once he was out of office or “removed from office.”

One of the judges, Denny Chin, followed up on his response and asked how a crime like that would be handled while Trump was in office. “Nothing could be done, that’s your position?” Chin asked.

“That is correct,” Consovoy responded.

Also Read: MSNBC's Mika Brzezinski Worried for Rudy Giuliani's Welfare: 'Someone Needs to Take Care of Him. It's Abusive'

Consovoy did not immediately respond to TheWrap’s request for comment.