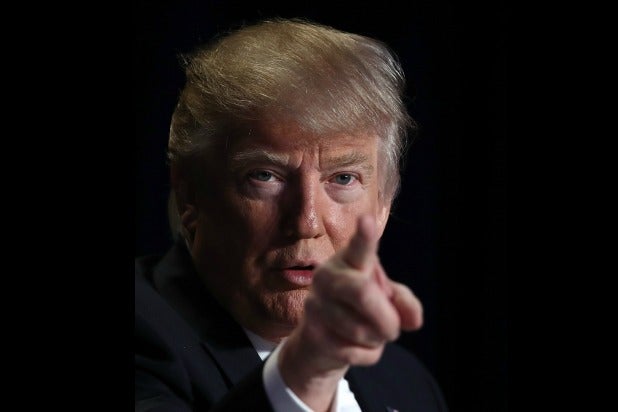 We’re in Month 2 of Through the Looking Glass with President Trump.

Any day — indeed, most days — we wake up and find our president has passed along new information that seems somewhat outlandish, yet is being put out to the world as fact.

And then sometimes we learn that, as it seems, it’s totally wrong.

He did it again today, claiming that President Obama released 122 “vicious prisoners” from Guantanamo who “returned to the battlefield” and presumably terrorist activity.

122 vicious prisoners, released by the Obama Administration from Gitmo, have returned to the battlefield. Just another terrible decision!

Fact-checkers everywhere (there’s now a lot of them) pointed out that the Director of National Intelligence website shows that of the 122 ex-detainees he suggested had returned to terrorism, 113 of those were released by President George W. Bush.

Rewind the tape to… “Fox & Friends”! Around the same time as Trump tweeted, the morning show noted that 122 prisoners had been released from Gitmo and returned to terrorism.

“Fox & Friends” is often light on facts and heavy on distorting context, but this time it’s not their fault. In this case they did not say that Obama had released the prisoners, but our president made that logical leap and shared it with the world.

As most media observers now know, that same pattern happened this weekend, with Trump waking at dawn (time stamp: 5:35 am ET) on Saturday to start a Twitter storm by claiming — with no evidence — that Obama had tapped his “wires” at Trump Tower.

Terrible! Just found out that Obama had my "wires tapped" in Trump Tower just before the victory. Nothing found. This is McCarthyism!

A spokesman for the former president immediately denied it, the FBI wouldn’t touch it with a 10-foot pole, and then James Clapper, the former Director of National Intelligence, said it was completely untrue.

“For the part of the national security apparatus that I oversaw as DNI, there was no such wiretap activity mounted against the president, the president-elect at the time, or as a candidate, or against his campaign,” Clapper said.

So what happened? It’s the Breitbart-“Fox & Friends”-Infowars axis that has become the presidential news feed.

On Friday, Breitbart picked up a story that had started months ago on a conservative site called Heat Street that raised the question of FISA.  Heat Street is a conservative website owned by Rupert Murdoch’s News Corp and started by Louise Mensch, a former Conservative Party member of the British Parliament.

Here’s how Factcheck.org tracked it down:

In a Nov. 7, 2016, article, Heat Street wrote that the FBI on two occasions sought a warrant from the Foreign Intelligence Surveillance Court, or FISA court, as part of its investigation of Russia’s interference in the U.S. presidential election, and Trump associates who were suspected of contacts with Russian officials.

Asked by news organizations for proof of Trump’s wild accusation of Obama, the White House provided five news stories written by four news organizations. Only two of them were relevant to Trump’s accusations, and none of claimed that Obama ordered illegal wiretaps.

Multiple media organizations reported that the Breitbart report was the subject of discussion in the West Wing on Friday, a report that was preceded by a similarly unfounded theory propagated on Thursday by conservative talk show host Mark Levin claiming the wiretap.

You proceed directly truly through the looking glass, as on Sunday those same outlets cite Trump’s accusation as a challenge to mainstream media. A Breitbart headline read, “DeepStateGate: Trump Ends the Wiretapping Innuendo Game by Dealing Himself In.” Here’s an excerpt from the story:

After months of unfounded allegations and badly sourced speculation intended to cripple his administration, maybe Trump wanted to prove that only one side of the partisan divide is permitted to make “wild allegations.” Obama’s plants in the Deep State can leak whatever they please, law and truth be damned. They can get an avalanche of hostile coverage moving with a few phone calls or emails. The media feels no contrition when the story turns out to be exaggerated or completely false, eagerly turning to the same Obama holdovers as sources for the next big phony scoop.

Others pointed to supposed proof that a conspiracy theory was true. (Another Breitbart headline:  “Mark Levin on Trump Wiretapping Claim: The Evidence is Overwhelming.'”)

This is the news cycle we now live in. And it means that we should not believe anything our president purports to be true.

Someday, Trump will need the mainstream media — and independent-minded voters — to believe him. And when that day comes, he will be out of luck.