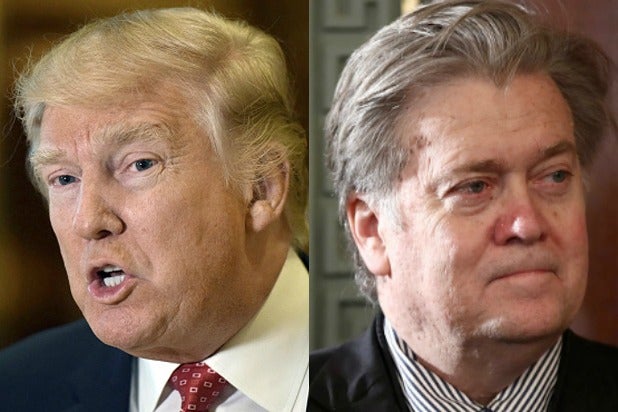 President Trump confirmed that top aides Steve Bannon and Jared Kushner have been infighting, admitting that he “told them to straighten it out or I will.”

Bannon and Kushner have been long rumored to have a feud within the White House, but Trump seems to admit that he would side with his son-in-law if forced to make a decision.

“I like Steve, but you have to remember he was not involved in my campaign until very late,” Trump told the New York Post. “I had already beaten all the senators and all the governors, and I didn’t know Steve. I’m my own strategist and it wasn’t like I was going to change strategies because I was facing crooked Hillary.”

Post reporter Michael Goodwin asked Trump if he is still confident in Bannon but did not receive a definitive answer.

“Steve is a good guy, but I told them to straighten it out or I will,” Trump said.

Bannon, the White House chief strategist and former Breitbart boss, has clashed with Kushner. He sees the president’s son-in-law an obstacle to influencing Trump’s political moves, according to the Daily Beast. White House Press Secretary Sean Spicer even tried to downplay the feud during Monday’s press briefing.

Breitbart had been extremely critical of Kushner but has toned it down since the New York Times reported that President Trump told Bannon and Kushner to “work this out.” Bannon resigned from Breitbart News in November and has repeatedly said he no longer makes editorial decisions.

Politico reported last week that Kushner has complained to other officials about Bannon’s attempts to “deconstruct the government,” which Kushner believes will hurt Trump.