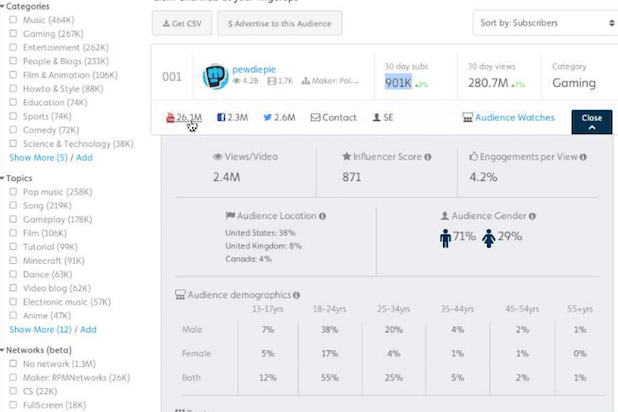 Tubular Labs has raised $11 million in a Series B round it will use to improve products used by more than 2,000 companies who produce online video, including Vice, AwesomenessTV and Maker Studios. Tubular also used its funding announcement to unveil its most important product yet, Tubular Intelligence.

Like Tubular’s dashboard, Intelligence offers those top publishers data about the people watching the most popular YouTube channels and videos. This latest product offers even more information about those.

This data serves myriad purposes. YouTube networks like Maker and Awesomeness can use it to convince advertisers they should spend money on their channels to reach a particular audience. A YouTube creator can find potential partners or use the data about trending topics to inform their own videos. A media company like Activision can see if any popular YouTubers are making videos about “Call of Duty” and try to work with them in the future.

Tubular CEO Rob Gabel hopes his latest product will bring order to the diffuse online video marketplace, helping publishers, advertisers and creators make more money and be more efficient. Advertising dollars are slowly moving into the space, and a more ordered environment will help speed that up.

“TV is a giant industry if you consider advertising revenue, but it’s pretty easy to understand,” Gabel told TheWrap. “Online video is incredibly complicated. How long should my ads be? Are they skippable? If I want to be involved with automotives in online videos, what strategy should I take with what videos and what publishers?”

Other companies, such as ZEFR, offer enterprise software and vital data to that helps brands and creators  connect with influential fans on YouTube and informs their marketing.

Gabel told TheWrap that his company will stand apart for its “flexible, self-service intelligence set.”

“Tubular has been collecting the most data for the longest amount of time,” he said.

He’s convinced investors, including the Connecticut-based Canaan Partners. The venture capital firm led this funding found, in which prior investors such as FirstMark Capital and Lerer Ventures also participated.

“What attracted us to Tubular are the broad and loyal customer base that the company has built rapidly through referrals, and the richness of the insights provided through its AudienceGraph technology,” said Canaan Partners’ Warren Lee said in a statement. “We are excited to be working with Rob and his team to build a world-class technology company.”