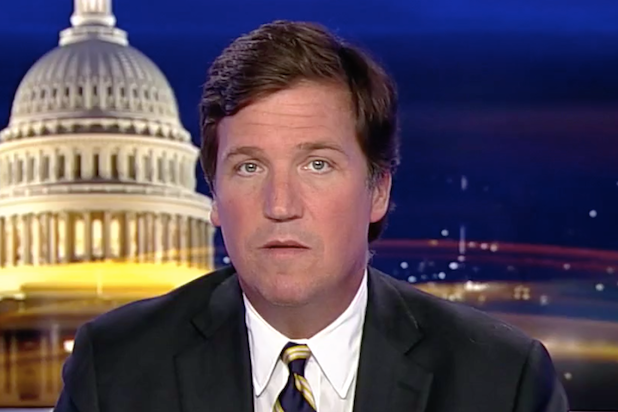 Fox News primetime star Tucker Carlson publicly thanked his network this week for supporting him through a months long advertiser boycott and a blizzard of bad headlines in recent days, but back in 2003, the host took a very different view, calling his colleagues “a mean sick group of people” with whom he doubted he would ever work for.

As reported by the Washington Post and many others at the time, the storm got going in 2003 when Carlson worked for CNN as co-host of the network’s debating show “Crossfire.” In a playful segment about telemarketers, a viewer asked Carlson if he would give out his own phone number on air. The host obliged — but the number he then recited turned out not to be his, but was instead that of the Fox News Washington bureau.

The network promptly retaliated by posting Carlson’s own phone number to their website. The move (which today would commonly be known as doxxing) resulted in a storm of harassing calls to Carlson’s wife and family. Fox News subsequently ignored Carlson’s demand to remove the number and said they would only do so if the host apologized on air for his error, which he later did.

“They’re a mean, sick group of people,” Carlson told the Post at the time. “Don’t harass my wife and kids. Even the Mafia doesn’t do that.” The Washington Post reporter who wrote the story, Howard Kurtz, now also works for Fox News as host of the show’s media-news program “Media Buzz.”

“CNN threw the first punch here. Correcting this mistake was good journalism,” a Fox News spokeswoman said at the time.

And while Carlson routinely inveighs against CNN to millions of people every night from Fox News primetime and disparages their senior media reporter, Brian Stelter, as a “eunuch,” he had nothing but praise for the network when he was there and publicly doubted he would ever work at Fox News.

“It’s hard to imagine,” Carlson told Salon in 2003 after being asked by the website if he might ever consider jumping ship to Fox. “If you’re in Peshawar, they’re not watching Fox News Channel, they’re watching CNN. I know it sounds trite, but I love the fact that CNN is engaged with the world. CNN USA, our domestic network, doesn’t carry a lot of foreign news. But it’s a great organization.”

In the same interview Carlson also broadly attacked Fox News and their use of “straw men” to promote right wing ideas.

Well, what I think the problem is in general and, not just with Fox, but the genre, is that it encourages you to use a straw man. So for example you see hosts bring on, “This is Jeffrey Mohammed X, and he’s the president of the Association to Kill White Motherfuckers,” and he’ll be presented as a spokesman for black America. And then the host will say, “Well, how can you support lynching white people? That’s just wrong!”

Carlson went on to leave Crossfire in 2005 (shortly after a very memorable on-air confrontation with then-“Daily Show” host Jon Stewart). Before joining Fox News he spent 2005-2008 at MSNBC where he frequently faced off against a young Rachel Maddow. He joined Fox News as a contributor in 2009 and became a full time host in 2016, replacing Bill O’Reilly and largely holding on to his predecessor’s longtime primetime ratings dominance.