Fox News’ Tucker Carlson has amplified a lot of anti-vax and functionally pro-COVID sentiments on his show for months, even if, as Fox News always notes when asked, he has very carefully insisted he is not anti-vaccines and is simply asking questions about this particular vaccine.

But whether you believe that or not, on Thursday’s episode of his show Carlson fully endorsed people who buy and use fake vaccine cards to avoid getting vaccinated themselves. He also said that efforts to control the spread of COVID-19, which has killed hundreds of thousands of Americans and rendered hundreds of thousands more seriously ill, are “serious” crimes committed by “tyrants” who Tucker said he hopes will be “punished for it.”

So in recent weeks there have been some high profile arrests of people who, for some reason, would rather risk death and risk actively harming other people than just get vaccinated. For instance, a woman who used a fake card to enter Hawaii, a father and son who tried to do the same thing, and a married couple who tried to do the same thing. The FBI considers fake vaccine cards to be a crime, incidentally. 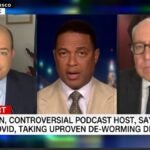 But rather than calling out people who violate the law and potentially expose themselves and other people to COVID-19 in the process, Tucker expressed outrage that they were punished at all.

“So in good conscience, they’ve risked their careers to preserve their right to bodily autonomy, and now they’re in jail for that,” he said. “Now these arrests will be used to justify digital health passports for the entire American population, that is true. Save this tape. In fact, (Manhattan District Attorney) Cyrus Vance has already enlisted Big Tech to help root out the disobedient in New York.”

Carlson then quoted Vance, who pointed out that “Making, selling and purchasing forged vaccination cards are serious crimes, with serious public safety consequences.”

“You know what’s a serious crime?” he continued. “Forcing Americans to take drugs they don’t need or want. That’s a very serious crime. And let’s hope, in the end, someone is punished for it.”

Of course, thousands of people are being hospitalized or dying of COVID every day despite the fact that vaccines are free and widely available. And the vast majority of them are people who refused to get vaccinated only to discover that COVID-19 actually is real and will kill them. There has also been a wave of fringe right-wing extremists in recent weeks who publicly advanced lies about both COVID and the vaccine only to get sick and, in very many cases, die from it.

Suffice to say, public health measures are not actually crimes, and U.S. history has dozens of examples of vaccine mandates, including during the Revolutionary War. However, forgery is a crime in all 50 states. 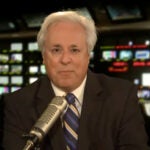