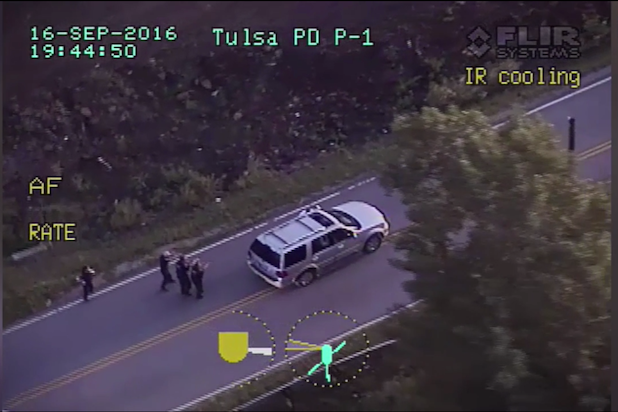 The police officer who shot an unarmed black man in Tulsa, Oklahoma, last Friday has been charged with first-degree manslaughter, AP reports.

Prosecutors in Tulsa filed the charges against officer Betty Shelby on Thursday.

Tulsa, Oklahoma, police released video footage on Monday of 40-year-old Terence Crutcher being shot and killed by a white officer after police responded to a stalled vehicle. The video has since gone viral and ignited backlash over the continuing disproportionate rate of police brutality against black men.

Also Read: Steve Harvey on Terence Crutcher Shooting: 'This is Crazy, This Country Losing It'

“He refused to follow commands given by the officers,” Tulsa police spokesperson Jeanne MacKenzie told reporters following the release of the video, which does not clearly show the moment when Crutcher is shot, according to the Washington Post.

“They continued to talk to him; he continued not to listen and follow any commands. As they got closer to the vehicle, he reached inside the vehicle and at that time there was a Taser deployment, and a short time later there was one shot fired.”

According to ABC, police chief Chuck Jordan said Crutcher did not have any weapons on him or in his vehicle.

Crutcher’s death is the latest in a string of police shootings of black men. Earlier this summer, the police killings of Alton Sterling and Philando Castile made headlines in Minnesota and Louisiana, respectively.

According to a Washington Post’ database that tracks police shootings, Crutcher is one of 162 black men to have been killed by law enforcement officers this year.