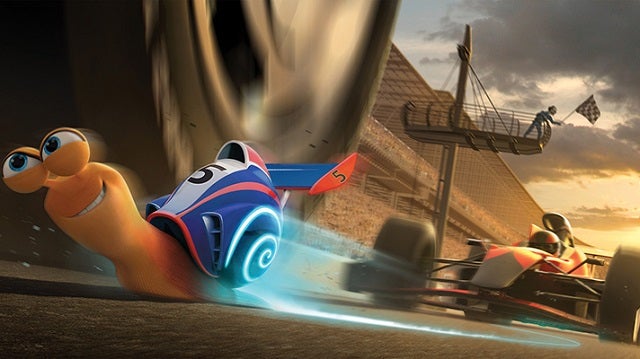 Can “Turbo” — an animated movie about a snail with the need for speed — find success in a summer box office already crowded with minions, monsters and Smurfs?

DreamWorks Animation and distributor Fox will find out starting Wednesday, when its $135 million 3D kids film hits theaters. It's getting the jump on a box office weekend with three other wide releases debuting Friday: action comedy "Red 2," horror film "The Conjuring" and supernatural action thriller "R.I.P.D."

The PG-rated "Turbo" will  be in more theaters, around 3,500, than any of them. But it’s in a tight spot, coming on the heels of two other animated kids movies — “Monsters University” and “Despicable Me 2” — that have scored big at the box office, and two weeks before Sony rolls out “Smurfs 2.”

All of those other films are sequels, while “Turbo” is an original. That can be a selling point, but also makes marketing tougher — particularly in a summer as crowded as this. "Parents and kids have been driving the box office for the past month, so at some point we're going to see some family-film fatigue,” said BoxOffice.com editor-in-chief Phil Contrino. “On the other hand, something fresh should have some appeal.”

Projections have the PG-rated snail tale doing around $35 million over the five days. That's not great for a movie with that kind of production budget, but Fox and DreamWorks Animation believe it will find a niche and play through the summer. The reviews are OK (60 percent on Rotten Tomatoes) and the marketing, which suggests it’s a “Fast and Furious” for kids, seems solid.

Turbo” is an important project for DreamWorks Animation, which is trying to expand its reach beyond movies. A TV series, “Turbo: F.A.S.T. (Fast Action Stunt Team),” will launch on Netflix in December.

DreamWorks Animation's last Fox release, "The Croods," was a hit. The animated prehistoric family tale has brought in $185 million domestically and nearly $400 million overseas since opening to $43 million in March. Fox followed that up with "Epic," an original from its in-house unit Blue Sky Animation, and the tiny heroes tale is up to $105 million domestically and has added $135 million abroad.

Both had the family market to themselves. "Turbo" won't.

David Soren came up with the idea for “Turbo” from watching his 6-year-old plays with race cars and front-yard snails. Making his directing debut, he shares the writing credit with Robert Siegel and Darren Lemke.

A lot of the action takes place at the Indianapolis 500, and four-time IndyCar Series champ Dario Franchitti is on board as a technical adviser.