Another day, another award for Fox’s "Glee."

The first-year Fox dramedy is one of eight shows being feted by the TV Academy with the organization’s third annual do-good awards. 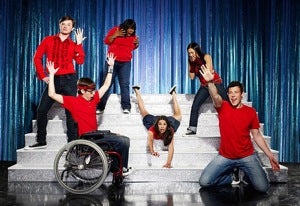 The so-called TV Academy Honors singles out "programs that have had a significant impact on the viewing audience" by tackling big issues.

Think of them as the Afterschool Special of awards season.

"Glee" is getting a pat on the back for the episode "Wheel" (that’s the one in which the cast all climbs into wheelchairs in order to make Artie (Kevin McHale) feel better. (It also made MoJoe cry with that John Lennon song at the end. TMI?)

“This year, we were impressed by not only the number of entries received but also by the breadth of subject matters addressed,” TV Academy chief John Shaffner said. “We went to great lengths to select programs that reflect the mission of the Television Academy Honors committee — to highlight the power of television and its ability to initiate important dialogue and ultimately instigate change.”

The full list of winners would be after the jump, if this blog could jump stories to another page. But we can’t. So just keep scrolling down:

CSI “Coup De Grace”– One of America’s most popular dramas tackles the still important and challenging questions of race, profiling and assumptions about racial prejudice. “Coup De Grace” is an emotionally charged story of a veteran cop who kills another off-duty officer by accident and the infighting that ensues between the police and the local community as they work out the ugly details of the case. (Produced by CBS Productions in association with Jerry Bruckheimer Television)

Glee “Wheels”– This dynamic episode weaves three main threads together to paint a portrait of how we treat others – and how we can do it better. In “Wheels,” Will (Matthew Morrison) encourages the Glee Club to support Artie (Kevin McHale), by asking each of them to spend a week in a wheelchair. Meanwhile, Kurt (Chris Colfer) and Rachel (Lea Michele) compete for a solo traditionally sung by a female performer, while cheerleading coach Sue (Jane Lynch) chooses a student (Lauren Potter) with Down syndrome to join the squad. (Produced by Ryan Murphy Productions in association with 20th Century Fox Television)

“Grandpa, Do You Know Who I Am?” - This film tells five stories of children, ages 6-15, who are coping with grandfathers or grandmothers suffering from Alzheimer’s disease. Maria Shriver provides commentary and delivers valuable lessons for the kids, urging them not to blame themselves for what their grandparents do or say. Maria’s own father, Sergeant Shriver, suffers from the disease. The film offers up a variety of perspectives on how kids can handle a grandparent’s loss of memory through kindness, patience and compassion. (Produced by HBO Documentary Films)
Explorer: “Inside Death Row” – “Inside Death Row” interviews three inmates in Huntsville, Texas, as their dates of execution draw near, and follows the stories of their families and loved ones as they deal with death firsthand. This story is not one of guilt or innocence; it is about how the State of Texas carries out the death penalty, as well as the men and women who, by choice or circumstance, become players in the act of executing another human being. Lastly, it explores how the residents of Huntsville feel towards living in a town that is ground zero for capital punishment in the United States. (Produced by Mannucci Inc. in association with National Geographic Television)

Private Practice "Nothing to Fear" – This thought-provoking episode tackles an issue that is often considered taboo: physician-assisted suicide. In “Nothing to Fear,” Sam (Taye Diggs) and Pete (Tim Daly) struggle with the moral, legal and ethical dilemma of Dr. Ball’s (Joel Grey) request to help him die. Their predicament brings all issues raised by physician-assisted suicide into focus, and the actors’ honest performances shed light on a topic that is often avoided. (Produced by ABC Studios)

Taking Chance – This non-political film about the war in Iraq tells a first-person account of a young Lieutenant Colonel (Kevin Bacon) and his journey accompanying a fallen solder’s remains to his family in Dubois, Wyoming. In the process and through a first-person account, the film gives insight into the military’s policy of providing a uniformed escort for all casualties of war. “Taking Chance” has changed U.S. public policy, allowing families to decide whether the dignified transfers of fallen service members’ remains at Dover Air Force Base, Delaware, should be open to the news media. (Produced by the Motion Picture Corporation of America and Civil Dawn Pictures in association with HBO Films)

Unlocking Autism – “Unlocking Autism” explores autism from both a scientific and human perspective, showcasing leaders in the field who are slowly chipping away at the mystery of autism on many different fronts – from the potential causes to effective therapies. This documentary provides an intimate look at those personally affected by autism as they share their hopes and frustrations about coping with the disorder. (Produced for Discovery Health by Figure 8 Films)

Vanguard: “The OxyContin Express” – In the season premiere of “Vanguard,” correspondent Mariana van Zeller travels to South Florida, the “Colombia of prescription drugs,” to expose a bustling pill pipeline that stretches from the beaches of Fort Lauderdale to the rolling hills of Appalachia. “The OxyContin Express” is an in-depth investigation of the growing, devastating effects of prescription drug abuse. (Produced by Current TV)