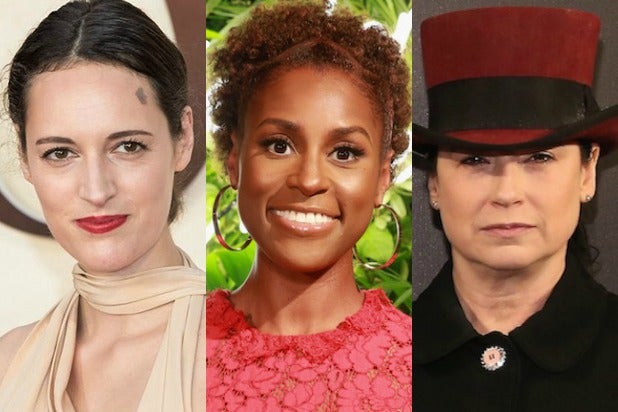 Female representation both in front of and behind the camera has dropped on TV programs in 2017-18, according to the latest “Boxed In” report released Tuesday by the Center for the Study of Women in Television and Film at San Diego State University.

Of all the projects produced for television, the study showed that women accounted for only 27 percent of all creators, directors, writers, executive producers, producers, editors and directors of photography in the 2017-2018 seasib. It’s an even smaller percentage than last year, when 28 percent of creators were women.

And when it comes to onscreen characters, females comprised 40 percent of all television speaking roles (on broadcast networks, cable and streaming services) during that same period, which is down from 42 percent in the previous cycle.

For example, one of this year’s Emmy-nominated directors, Amy Sherman-Palladino, created “The Marvelous Mrs. Maisel,” a comedy centered on a female protagonist (Rachel Brosnahan). Similarly, Kari Skogland was nominated for “The Handmaid’s Tale,” which depicts the grueling plight of women in a totalitarian society.

“The findings indicate that strategies aimed at increasing the numbers of women creators and executive producers would help make subconscious bias work for women rather than against them,” Dr. Martha Lauzen, executive director of the Center, said in the report. “These individuals hold the keys to viewers seeing more female characters on screen and more women working in other important behind-the-scenes craft areas including writing, directing, and editing,”

Despite the popularity of such shows, women comprised only 22 percent of creators and 26 percent of executive producers on television programs this past season.

With the 70th Primetime Emmys coming up this week, the conversation over lack of gender parity is front and center. Of the seven directing categories, only four women were nominated, compared to 40 men. This imbalance was reflected in this year’s annual report.

“The fact that I’m the only girl at the party is, frankly, f—ing ridiculous. I mean, what the hell?” Sherman-Palladino told TheWrap in August.

Female representation in television differs across the board according to race, as well. On broadcast networks, 66 percent of females were white, 20 percent were black, 7 percent were Asian, and 6 percent were Latina.

The study noted that despite 2017-18 being a peak for Latina representation, “Latinas remain the most underrepresented ethnic group when compared to their representation in the U.S. population.”

A study of the individual broadcast networks — NBC, ABC, CBS, Fox, The CW — showed that CBS programs had the lowest percentage of females behind the scenes, with 23 percent. The network also had just 37 percent of speaking roles for women — again the lowest margin for the the broadcast networks.

The numbers may shed light on the inner workings of the network, especially with president Les Moonves’ resignation after accusations of sexual misconduct and misogyny. Despite female-led programs such as “Mom,” CBS lagged well behind its counterparts.