A month after Walter Cronkite, another CBS News giant has died.

Don Hewitt, creator and legendary producer of newsmagazine “60 Minutes,” succumbed to pancreatic cancer at his Bridgehampton, New York home. He was 86. 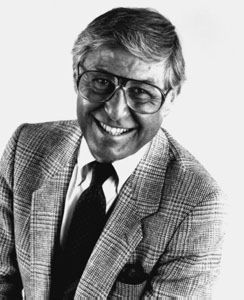 He was the executive producer of "CBS Evening News With Walter Cronkite" in the early ’60s before launching “60 Minutes” on Sept. 24, 1968. He was credited with pioneering the television newsmagazine format.

"Don Hewitt was an indisputable powerhouse of network television," said Katie Couric. "He set the standard and laid the foundation for 60 Minutes, and because of his vision, it continues to be a program where extraordinary journalism not only survives, but thrives.

"In the history of journalism, there have been few who were as creative, dynamic and versatile as Don Hewitt," CBS Corp. CEO Les Moonves said. "The depth and breadth of his accomplishments are impossible to measure, because since the very beginnings of our business, he quite literally invented so many of the vehicles by which we now communicate the news.

“Don was all genius and joy," said ABC News anchor Diane Sawyer, who worked for Hewitt at "60 Minutes" in the 1980s. "He greeted every brand new story with the excitement of a cub reporter. At a fancy political dinner party, he once made me crawl under the table and out of the room to scoop the competition on some fact he had learned."

His tenure wasn’t without controversy, however. Hewitt’s decision to air footage of Dr. Jack Kervorkian lethally injecting a patient in 1998 was widely criticized as a ratings stunt.

In 1996, executives at CBS refused to air an interview Hewitt produced with Jeffrey Wigand, the tobacco executive-turned-whistleblower, fearing a $10 billion lawsuit — the story of which was later made into a film, “The Insider,” starring Al Pacino and Russell Crowe.

He often referred to the incident as the show’s low point. (Some criticized Hewitt for not quitting in protest; he opted to stay with "60 Minutes” so he could “fight another day.”)

Hewitt served as the show’s producer until 2004, becoming a producer-at-large for CBS News.

Donald Shepard Hewitt was born on Dec. 14, 1922 in New York. He dropped out of New York University but landed his first journalism job at the New York Herald Tribune.

He won numerous Emmy Awards — including the Founder’s Emmy in 1995  including a Lifetime Achievement Emmy in 2003 — and was inducted into the Television Academy Hall of Fame in 1990.

He is survived by his wife of 30 years, Marilyn Berger, two sons, a stepdaughter and three grandchildren

“Don Hewitt was probably the greatest news producer in television," said Barbara Walters. "He was original, creative, far-seeing and had an amazing gut instinct. To lose Walter Cronkite and Don Hewitt at almost the same time is truly the end of a remarkable era in news."

NBC’s Brian Williams said Hewitt "stood up to his relentless illness the very same way he fought for journalistic values."

Added Sawyer: "He was one of those bosses who made you braver."