The Nielsen ratings for the first quarter are in, and in the cut-throat world of cable news, Fox remains dominant, while CNN — propelled by coverage of breaking news in Japan and the Middle East — edged MSNBC in primetime among 25-to-54-year-olds. 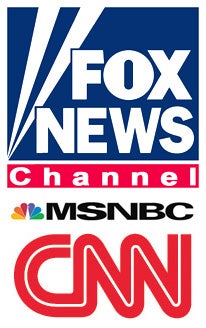 On the network side, the "CBS Evening News" experienced its "lowest-rated first quarter among total viewers and adults 25-54 since at least 1992 — as far back as Nielsen’s records for the program go." This will no doubt fuel even more speculation that Katie Couric is on her way out as its anchor.

Here are the highlights (and lowlights), network-by-network:

>> For the 37th consecutive quarter, Fox has been the most-watched cable news channel in terms of total viewers.

>> FNC averaged more total viewers for its broadcast day and in primetime than CNN and MSNBC combined.

>> Fox swept the top 12 cable news programs in total viewers, and boasted the top eight programs in the 25-to-54-year-old demographic — “The O’Reilly Factor” and “Hannity” were the top-two in both categories. (MSNBC's "Rachel Maddow Show" and the combination of Keith Olbermann's "Countdown" and Lawrence O'Donnell's "Last Word" placed 13th and 14th, respectively, followed by "Fox and Friends" at number 15.)

>> In March, Cooper's "360" show topped FNC’s "On the Record With Greta Van Susteren" for the first time more than two years.

>> The “CBS Evening News with Katie Couric” registed its lowest-rated first quarter among total viewers and 25-54-year-olds since at least 1992.

>> Its 6.43 million total viewers and 1.98 million 25-54-year-old viewers fell just slightly compared to the first three quarters of 2010 — but that had been its lowest-rated first quarter ever.

>> “NBC Nightly News with Brian Williams” held onto the top-rated evening newscast slot for the quarter, though it slipped in both total and 25-54-year-old viewers compared to 2010. (However, as TVNewser pointed out, it's hard to compare 2011 to 2010, when NBC’s coverage of the Winter Olympics gave Williams' broadcast a bump.)

>> “ABC World News with Diane Sawyer” was "the only evening newscast to grow in total and demo viewers year-over-year for the quarter," according to TVNewser.

>> Also per TVN, the show "delivered its largest first-quarter audience since 2008."