The TV upfront season is when broadcast executives are on edge. The networks sell 70 percent or more of their ad time before summer ends.

And after some rough years recently, this one could be a good one for network execs.

Analysts at Nomura, observing a “surge in TV ad demand,” believe we’ll see a “return to year over year growth in upfront commitments.”

Behind that prediction Nomura points to a current “robust consumer economy.” Coupling that with low unemployment and strong auto sales increases (broadcast TV ad spend for the car category is up five percent year over year for January and February), Nomura estimates a 5.5 percent dollar growth in total broadcast commitments, reaching a total of $8.8 billion.

Last year, the post-upfront scatter market – where ads are sold on more of a last-minute, a la carte basis – proved quite expensive, so networks might be able to push media buyers to spend more than last year.

The Fox growth illustrates how poorly by comparison that network performed during the prior upfront period. It’s also perhaps reflective of Fox’s still-unimpressive TV ratings being relatively steadier than the competition’s — a low starting point and a low ending point means more stability.

The projected small gains for ABC underscore the low ratings it’s endured this season, and perhaps a  pinch of concern over the broadcast channel’s changing of the guard. Next week’s upfront will mark Channing Dungey’s first turn as president; Paul Lee was ousted earlier in 2016.

Also Read: What the Hell Are TV Upfronts? A Brief Explainer 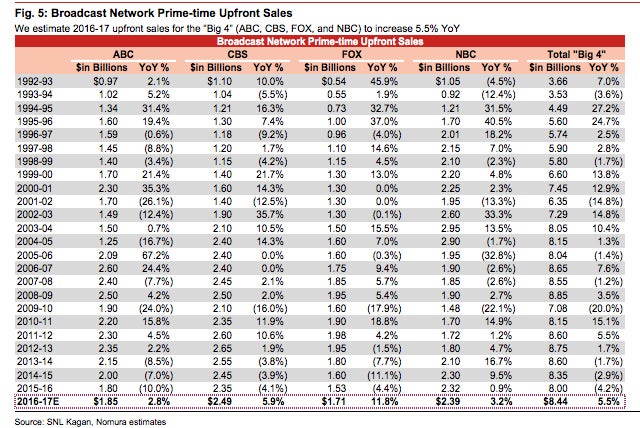 That aforementioned 1-through-4 order happens to be the same way the Big 4 networks lined up this season in total viewers. In the key 18-49 demographic, however, Fox leap-frogged ABC, thanks to the NFL Playoffs.

In addition to an overall eyeball advantage, ABC should still beat the younger Fox this upfront season due to the stability of Dungey’s inherited lineup and her relative lack of unproven properties, Nomura suggests.

For NBC, the addition of some “Thursday Night Football” (“TNF”) will be quite enticing for advertisers. Despite being top dog these days, CBS procedurals should disproportionately benefit from the expanded definition of viewership — aside from the rest of “TNF,” there’s not much “must-see” live CBS programming.

Another way to look at movement is a network’s CPM pricing, or cost-per-thousand viewers. Nomura forecasts CBS will lead the pack there with 9 percent growth, ABC will fare 8 percent better this year than last year, and both Fox and NBC will rise 7 percent versus 2015.

Plus, as C3 (average commercial minute, inclusive of three-days of delayed viewing) supply continues to shrink, inventory sold on a C7 basis should increase, and maybe even become the currency for 75 percent of transactions, Nomura said.

Finally, advertisers may be thought of as returning to TV after a flirtation with digital — a medium increasingly viewed as complementary to TV ad buys rather than a substitute.

“These dynamics perhaps led marketers to believe that TV ad budgets shifted too quickly towards digital alternatives (particularly smaller digital players), and we believe the recent strength is, at least in part, a result of some of the ad-dollars returning to TV,” analysts concluded.

NBC and Fox will hold their upfront events on Monday, ABC is Tuesday, CBS will clean up on Thursday.