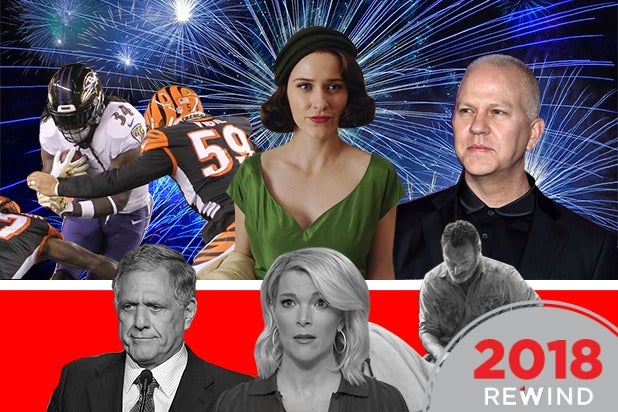 As they say every year, it has been one hell of a year — and that idiom even applies to the idiot box. Take “Roseanne” for example: In 2018 alone, ABC revived its old sitcom, made it the top show on TV, canceled it, ordered a spinoff, premiered that spinoff by killing off its former star AND went on hiatus with Dan Conner (John Goodman) already having a new love interest.

Mm-hmm, it’s been a looooooong 12 months.

Read below to see who we think had the best and worst year across the television industry.

Winner: “The Marvelous Mrs. Maisel”
“The Marvelous Mrs. Maisel” came out of nowhere (OK, it was out of Amazon’s Prime Video) and has cleaned up at awards ceremonies since. In 2018, both the show and its star Rachel Brosnahan won top Golden Globe honors — both are renominated for 2019, plus Alex Borstein as supporting actress. “Maisel” also scored eight of the 12 Emmy chances it had, including trophies for the show, Brosnahan and Borstein.

So yeah, it’s been a good year.

Loser: Megyn Kelly
Never defend blackface. Never, ever, ever. Megyn Kelly learned that lesson the hard way in the lead-up to Halloween 2018.

Kelly’s NBC News morning show “Megyn Kelly Today” host was unceremoniously canceled in October after the former Fox News Channel primetime personality said she didn’t see the problem with wearing blackface on Halloween. We invite readers who don’t remember that snafu to just imagine how well it went over.

Winner: 21st Century Fox Shareholders
Twenty-First Century Fox shareholders better be giving Comcast CEO Brian Roberts a nice gift basket or two this holiday season. After all, his attempts to out-flank Disney in their eventual acquisition of Fox’s film and TV assets tacked on an additional $20 billion to the initial $54.8 billion price tag, which ended up north of $71 billion. Though Disney CEO Bob Iger probably had that much just laying in between his couch cushions.

Loser: Les Moonves
Oh, you haven’t heard? Perhaps no entertainment executive had a further fall from grace in 2018 than the (former) longtime chief of CBS. First, he was engaged in a nasty legal battle with Shari Redstone, before being the subject of a never-ending string of sexual misconduct allegations, which led to his resignation from CBS after 23 years.

Yes, it was all bad. It was all really bad — but you definitely have heard about Moonves ad nauseam and could probably use another “Winner” right about now.

Winner: Ryan Murphy
If we needed to crown one person 2018’s overall TV winner, the list would begin and end with Ryan Murphy: the prolific producer who inked a reported $300 million deal with Netflix last February. (Yes, that’s bigger than Shonda Rhimes’ reported $150 million in 2017.)

While Murphy’s slate of streaming originals is still to come, he’s had his hands more than full with projects at his former home studio, 20th Century Fox TV, which he officially said farewell to in July.

In 2018, Murphy launched new dramas “9-1-1” on Fox and “Pose” on FX, along with the eighth installment of “American Horror Story” (which was renewed through Season 10 this summer) and “The Assassination of Gianni Versace,” the second chapter in his “American Crime Story” saga. “Versace” and “Pose” are both critical darlings that have kept Murphy on his toes — heading up to accept awards all season long, that is.

Oh, and he finally got his star on the Hollywood Walk of Fame last month. Well-deserved.

Loser: Marvel Shows on Netflix
They all gone — with the exception of “Jessica Jones” and “The Punisher.” This year, Netflix axed “Iron Fist,” “Luke Cage” and “Daredevil” (and to a lesser extent, “The Defenders”). Thank goodness for upcoming SVOD service Disney+.

Marvel series aren’t exactly killing it on Disney’s ABC though: “Agents of S.H.I.E.L.D.” is still on the air, but it’s now a summer show. That box office thing still seems to be working out though.

Winner: Live Sports
The year 2018 was a good one to be a sports league. The UFC signed a $1.5 billion deal with ESPN, WWE signed about a $1 billion deal to move “SmackDown Live” from USA Network to Fox broadcast channel.

The granddaddy of them all was Fox’s acquisition of “Thursday Night Football” — the network paid $3.3 billion for the privilege. So far so good, as NFL ratings are actually up this year season-to-date. That’s the exact opposite of non-live-sports viewing trends.

The audience for AMC’s big hit series is down like 35 percent this year, per Nielsen. Fortunately, “The Walking Dead” was once big enough to absorb such a hit — but it can’t take many more losses.

Winner: Henry Winkler
Everyone loves Henry Winkler — it just took quite a while for the Television Academy to catch up. Winkler had been nominated for five Emmys before finally winning on his sixth chance. (Yes, those date back to his [Happy] days as “The Fonz.”)

Thank goodness for HBO’s “Barry.” Not only did it get the nicest man in Hollywood his due, it also introduced the world to NoHo Hank (Anthony Carrigan), who deserves all the awards.

Loser: “Heathers”
Where do we even begin? Paramount Network was set to debut its loose adaptation of the 1988 Wynona Rider-Christian Slater film in March, but the Viacom-owned cable channel delayed the series — which included scenes with guns in schools — until July following the tragic Parkland, Florida school-shooting. That re-slated premiere never happened either, and Paramount said it would shop the show instead.

Or maybe not. Because in October, Paramount Network reversed course again, saying that it would air the series after all — just not its “controversial” finale.

Or also maybe not. “Heathers” saw its episodes pulled (yes, again) after the synagogue shooting in Pittsburgh. Some things are just not meant to be.

Winner: NBC
NBC has clinched a No. 1 finish among adults 18-49 for the fifth calendar year in a row and sixth time in seven years. The network’s current +38 percent lead over its closest competitor is the biggest margin to this point in the year in Nielsen people-meter history. And yes, even excluding sports, NBC wins 2018 in ratings. The broadcaster is also going to win 2018 in total viewers for the first time in 16 years.

Loser/Winner: Shows Saved After Cancellation
2018 was a banner year for TV series that got the ax at their home network and were quickly resuscitated by another platform. The most famous cases here are obviously Fox’s “Brooklyn Nine-Nine,” which was rescued by NBC just over 24 hours after cancellation, and ABC’s “Last Man Standing,” which went to Fox a year after it was axed on ABC. Then there was “Lucifer” (another Fox casualty), which was revived by Netflix, a streamer that also picked up ABC’s “Designated Survivor.”

Broadcast networks weren’t the only ones to see their leftovers reheated, with Syfy’s “The Expanse” moving to Amazon after some serious fan outcry. Honorable mention goes to NBC’s “Timeless,” which did not get a save after being canceled for the second time, but was handed a 2-hour series finale as a conciliation for its cancellation. That airs Thursday.

Also Read: 22 Most Shocking TV Character Deaths of 2018, From 'The Affair' to 'Westworld' (Photos)

Winner/Loser: “Roseanne”
“Roseanne” somewhat fits the bill for our previous bullet-point, but the fate and state of the ABC hit sitcom’s universe is certainly worthy of its own breakout. “Roseanne” returned in Spring 2018 as No. 1 entertainment show on television. By late May, the series was canceled after some erratic behavior and offensive tweets by star Roseanne Barr.

Less than one month later, every Conner not named “Roseanne” had a job again, as ABC ordered spinoff “The Conners.” That version has done well, but nowhere near “Roseanne”-well. To be fair, nothing has.

Tim Baysinger and Jennifer Maas contributed to this story.