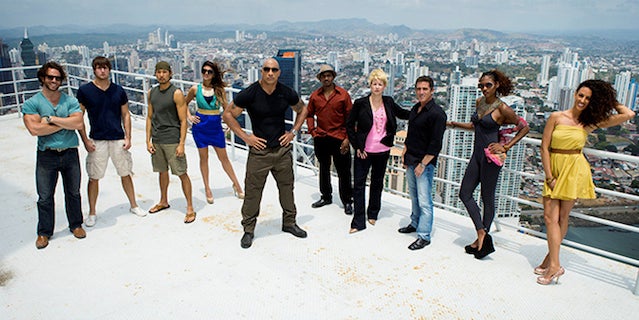 Dwayne "The Rock" Johnson is already one of the biggest movie stars in the world, and after Thursday's premiere of TNT's "The Hero," he'll add reality star to his resume, too.

So how was the blockbuster action hero convinced to join the likes of Hulk Hogan, Gary Busey, and Bret Michaels in the reality TV genre? According to "Hero" executive producers Rick Ringbakk and Craig Armstrong, all it took was a phone call.

"It was a phone pitch, actually," Armstrong, a former "Survivor" co-executive producer, told TheWrap. "And he just said, 'I'm in and I want to be in big time.'"

"And we were pretty stunned," Ringbakk, a former "Amazing Race" producer added. "Our hope, at that point, was any involvement from him because his brand speaks so much to the brand we wanted this show to be, but he turned around and really upped the level."

Johnson serves as the motivational host, as well as executive producer, of the new series which tests nine contestants' strength, courage, and integrity through a series of physical challenges designed to showcase their heroism. As the show's title suggests the goal is to be crowned the ultimate hero by viewers — and win a bunch of money, of course.

Despite whether the show succeeds or not, the career move is certainly interesting, given it bucks the celebrity trend in relation to reality television. Typically, stars participate in order to boost their fading fame as is the case with ABC's "Dancing With the Stars" and NBC's "Celebrity Apprentice." Johnson's star, on the other hand, is soaring higher than ever after starring in a string of box office hits, most recently Universal's record-breaking "Fast & Furious."

Ringbakk and Armstrong, who produce the series through their production company, 5×5 Media, said Johnson didn't just want to appear in the show, but also wanted to develop it. When approached about a year ago, the A-list actor deeply connected to the concept of taking every day people, from all walks of life, and turning them into heroes that audiences could truly root for as they push themselves to extremes.

Johnson is living proof of what an individual can do if they set their mind to something. High school football earned him a full scholarship to the University of Miami, where he played on the university's 1991 national championship team. A back injury, however, derailed his NFL career, and after a brief stint in the Canadian Football League, Johnson followed in the footsteps of his father and father's father by becoming a professional wrestler in the WWE. Within two years, Johnson rose to the top of the traveling show and won the championship belt.

In 2000, he took his career to the next level by starring as a villain in "The Mummy Returns," which led to his first leading role in "The Scorpion King." The rest is Hollywood history, and he has since been coined "franchise viagra" by industry insiders.

Armstrong described Johnson as a "go big or go home" kind of guy. So it's no surprise, Johnson did not go home during what sounds like a grueling "24/7" production schedule over the course of three weeks in Panama. He was just as committed as the contestants competing for the $100,000 grand prize, and cleared his very busy schedule to shoot the series.

"Sometimes, these celebrities, they don't really get involved and he's been involved since day one and really, really has cared about how this show has been crafted," Armstrong said. "It's something you don't see a lot, but he's been a great partner."

And "the greatest host in reality history," the producers added.

"I think people are going to watch this show and they are going to be amazed because it is his show," Ringbakk said. "He is in the show from start to finish, from top to bottom. It's a Rock show."