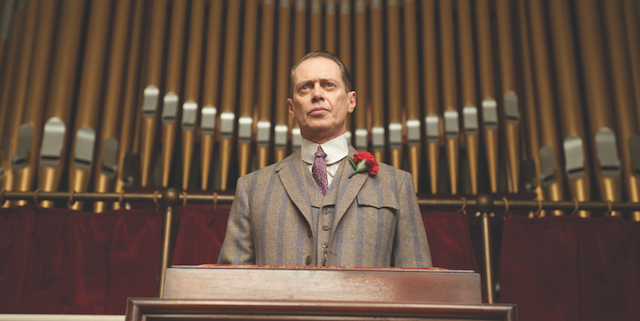 Two of the stars of "Boardwalk Empire," Jack Huston and Michael K. Williams, sat recently on one of the show's exquisite nightclub sets, talking about how few scenes they have together.

Which may be for the best. Huston plays Richard Harrow, a hired gun whose disturbing half-mask hides not just his war injuries but also his innate decency. Williams plays Chalky White, the head of Atlantic City’s African-American rackets, who commits crimes for the betterment of his family.

They can’t be on screen together very often, Williams explained to TheWrap, because too many people would die. “When you see Chalky or Harrow, you know that something’s going to go down,” said Williams. “You don’t want to be in a scene with them. You know they’re going to start making multiples of your wardrobe.” Making multiples? Williams, an expert in rendering his co-stars unemployed given his role on "The Wire" as stickup man Omar Little, explained why actors don’t want to hear that phrase. “When you get multiples, you’re gonna die,” he said. “When they shoot over and over, they get blood on the clothes, and they have to do it again … When you see multiples of your wardrobe, it’s usually when Harrow or Chalky’s in the room.”

On the season finale of Boardwalk’s third and best season, Harrow single-handedly took out a bordello full of gangsters, even as White joined in a brutal standoff to put down a gangster uprising. Many multiples were made. But the build-up to that bloodshed was long. The show metes out violence as strategically as a speakeasy would its best whiskey. When it arrives, not everyone is left standing.

“In the last episode it was like all-out f—ing war,” said Huston, looking fresh-faced without his Harrow mask and glasses. “And I had such an itchy trigger finger. Last season it was Episode 10, and I said to [director] Tim Van Patten, ‘Man, I haven’t killed someone in a long time. What’s going on?'”

In lulls between all the death, "Boardwalk Empire," like Huston, wears a half-mask of gentility, providing lilting accents, elegant parlor rooms, champagne flutes filled with promise and the most ornate costumes this side of "Downton Abbey." Then, just as we’re lulled into some sense of tranquility — what a lovely period drama we’re watching! –someone gets set on fire. Or sent home in a shipping crate. The show’s subdued moments sometimes feel like an attempt to make the violence all the more jolting. But showrunner Terence Winter has noted that many viewers prefer those moments, which offer political intrigue, family drama and some of the best music on television.

“We have people who can’t stand the violence, and they’re much more entertained by the family stuff,” he told TheWrap last year. “One person’s slow is another person’s fascinating.”

The sheer beauty of "Boardwalk" means few people complain when it takes time to let us admire the sights. In its first two seasons it was nominated for 30 Emmys and won 12 — for cinematography, art direction and special visual effects, among other categories. It also has won directing Emmys for Martin Scorsese and Van Patten, who are among the show’s executive producers.

But if there is any justice — and Boardwalk’s storylines make the case that there may not be — this could be the year "Boardwalk" finally wins a lead-actor Emmy for Steve Buscemi for his role as Enoch “Nucky” Thompson or Emmy recognition as television’s best drama. (In 2011, it won Golden Globes in both categories.)

Like many shows before it, including "The Wire," "Boardwalk" hit its stride in its third season. All of its characters’ ambitions and fears came crashing ashore at once, resulting in the show’s most magnificently crafted stories — and one perfectly placed set piece after another.

Gillian Darmody (Gretchen Mol) drowned a poor bastard who looked like her dead son, Jimmy (Michael Pitt). We saw a horrific, beautiful final vision of Nucky’s bobbed paramour, Billie Kent (Meg Steedle). And we shared the devastation of Margaret Schroeder (Kelly Macdonald) as her lover arrived home, broken and bent into a box.

Because "Boardwalk" took the time to earn each moment, the imagery served the show’s deft storytelling more than ever before. It was an especially impressive accomplishment given that many critics wondered where the show could possibly go after the death of one of its leads, Pitt, in its second season. That shocking departure came about when Nucky was forced to kill Jimmy, his former protégé, when he tried, as people always do, to usurp Nucky’s power.

“I think he does have a generous streak to him,” Buscemi told TheWrap. “He sort of responds to the way people treat him. What’s that saying: ‘Don’t mistake my kindness for weakness?'”

At its most basic level, the show is about people trying to slake the thirst created by Prohibition. Outlawing alcohol in 1920 fueled criminal empires from Nucky’s Atlantic City to Chicago, where Al Capone (Stephen Graham) was just discovering his special talents with a lead pipe.

But the liquor trade also opened up opportunities to countless Americans who might otherwise have been shut out. It meant work for Harrow, whose deformity likely would have kept him out of an office. Gillian, a child showgirl whose rape at 13 brought Jimmy into the world, rose to the relatively prestigious position of madame.

White became a dapper crime boss and essential ally to Nucky, even as other African-Americans of his time had to take what work they could get.

Critics of capitalism may see the liquor business as a metaphor for all American enterprise. As outsiders scratch their way in, they discover a world every bit as dirty as the one they’ve escaped. Winter, meanwhile, says the show’s look at the 1920s is echoed in the current debate over drug legalization. But he doesn’t believe the show needs to make a case for legalizing drugs: “I think history made it for us with Prohibition.”

The show leaves it to viewers to make moral judgments, as it focuses instead on the often-noble motivations of the criminal class. Gillian, for example, uses her position to teach her girls about art and literature — until mobsters take over their house, and Harrow has no choice but to shoot the place up. He does it to save Jimmy’s son, and in the process helps Nucky win back power from Gyp Rosetti (Bobby Cannavale).

With Rosetti dead, the show will go in another direction in its fourth season, premiering this fall. The war with Rosetti cost Nucky his power and prestige, but he finally knows who his friends are, including his once-estranged brother Eli (Shea Whigham). The latest attempt to bring him down may mean the end of Nucky’s days as a glad-handing politician.

“I think it’s made him more introspective and a little less willing to put himself out there so publicly,” Buscemi said. “He’s been through a lot, and he just wants to recede a little bit. But he hasn’t lost his appetite for wanting things and wanting a certain amount of power. That’s still there.”

Viewers of the show’s Season 4 trailer know where Nucky turns: We see him meeting Valentine Narcisse (Jeffrey Wright), a “doctor of divinity” who controls Harlem. Narcisse has a passion for power that Boardwalk viewers may find familiar. “Only kings,” he intones, “understand each other.”

"Boardwalk" has never had trouble veering off in unexpected directions. That was apparent to Mol when she learned in the show’s second season that her character — a grandmother at 37 — would have sex with her son in a flashback. The scene showed how damaged Gillian was by adulthood’s sudden assault on her youth.

Of the show’s writers, she added, “They can write anything. And you just have to be prepared to go there.”

Chances are it won’t be somewhere good. But that doesn’t stop the actors from hoping for the best for their characters. Williams, for instance, would love for White to see the Civil Rights Movement. “My mom got to see a black president,” he said. “So why couldn’t Chalky get to see Martin Luther King? ‘Chalky, I need you to round up the brothers and sisters, we’re doing a peace march.'”

“I’d like to see him have fun again,” he said. “It’s gotten darker as each season goes. He used to tell jokes, he used to laugh, he used to have friends. His world seems to be getting smaller and smaller as it gets bigger and bigger.”