Part 1: Is TV, As We Know It, Finished?…Plus: Five Ways to Save Network TV

The language is stark, the message is unmistakable: The future is looking bleak for network TV.

That’s the verdict from Time magazine, which paints a bleak picture of what’s to come for the big boys of broadcasting.

"In network television, nothing adds up," according to the newsweekly. "The networks are still scrapping with one another for ratings supremacy, but the days when they dominated the airwaves so thoroughly are just a ‘Wonder Years’ memory. (The) companies that have virtually defined American television…are sick and fighting for survival."

"As the network audience dwindles," Time continues, "one of the Big Three may be forced to close down or sharply curtail its operations."

One caveat, though: Time’s harsh warning about the state of network TV was written back in October … of 1988.

Twenty years later, the Big Three have become the Big Four (plus the CW). Advertisers still pay a major premium to sell their wares on broadcast TV. And experts of various stripes are still forecasting the end of network television as we know it. 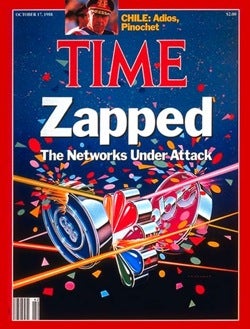 Take Bob Garfield, the longtime editor at large for Ad Age and co-host of NPR’s "On the Media." He’s just published "The Chaos Scenario," a dark tome that offers little good news for anyone invested in the current ad-supported model of free, over-the-air TV.

"Without being overly simplistic or melodramatic, the state of the Old Commercial Broadcasting Model can be summarized as follows: a spiraling vortex of ruin," Garfield writes.

In an interview with TheWrap, Garfield doesn’t back down from his harsh — some would call it Chicken Little-esque — assessment of commercial TV’s future.

"These forces are all converging," Garfield says of the factors leading to the end of ad-supported TV as we’ve known it. "The handwriting had been on the wall and then the recession came along to accelerate the path to demise."

As Garfield sees it, advertisers have already started paring back their TV ad buys, in part out of frustration that — until this year at least — networks seemed magically able to foist higher ad rates on buyers, even as their share of the viewing audience continued to decline.

"Audiences are fragmenting so much that soon there will be no critical mass" against which to sell substantial ad dollars, Garfield argues.

Lower ratings will cause even steeper declines in ad revenue (with a few exceptions, advertisers generally don’t value reality shows as much as scripted series, so a scheduled filled with "The Biggest Loser" isn’t an answer).

That cash crunch will force networks to take fewer chances on developing hits.

"The upfronts have always given the networks the cash they need, upfront, to shoot 13 or 22 episodes of a show," Garfield says. "That upfront cash won’t exist as much anymore…. The pool of production dollars is going to dry up. And it’s expensive to get money (for financing projects). So where does the new high quality stuff come from? I don’t know."

One possible solution, of course, could be for broadcasters to move toward a cable model — abandoning their affiliates and owned stations in favor of subscriber fees. NBC Universal chief Jeff Zucker has hinted such a notion might one day be appealing for NBC.

But as Garfield notes, the cable model isn’t perfect, either.

"Cable is no more insulated from chaos than anyone else," he says. "The very coaxial they’ve spent 50 years stringing is now the pipe for broadband that can distribute the very same programming for now fees and with less advertising." 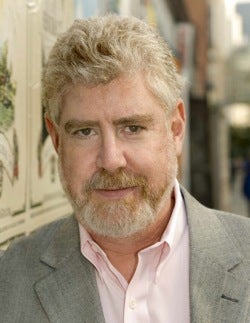 Another possibility would be for networks to find a way to get consumers to subscribe to a service that let them watch their content online, with limited commercials, any time they want. The question, of course, is whether consumers would fork over any cash at all given how easy it is to find TV content online for free.

"It’s damn near in our DNA not to have to pay for content," Garfield says.

Garfield offers some hope for TV types with his concession that "demand for high-quality scripted content remains at an all-time high."

He also suggests that the democratization of distribution — namely, the fact that YouTube has eliminated barriers of entry for aspiring writers and actors looking to break through– might yet be a good thing for media companies.

"The vast aggregated genius of the world" could eventually turn into a lower-cost pool for developing new hits, Garfield theorizes.

Garfield concedes that many folks consider him to be something of a Cassandra. In his book, he even quotes big names such as Bill Gates and YouTube’s Chad Hurley dismissing his theories.

And as the Time article from 1988 makes clear, predicting gloom and doom for network TV is a tricky proposition. As ratings for "American Idol" and "CSI" demonstrate, network TV still has an amazing ability to lure viewers in relatively big numbers — DVRs and YouTube be damned.

Still, in the end, Garfield says there’s simply no getting around the fact that Madison Ave. types are increasingly convinced that it’s foolish to continue spending billions of dollars on advertisers in order to reach fewer and fewer eyeballs. As ad money slips away from networks’ coffers, massive change will be unavoidable.

"The status quo has been fantastic," Garfield says of ad-supported media. "But it turns out it was an accident of history. It happened, it was great for 350 years– and now the digital revolution has rendered it unworkable.