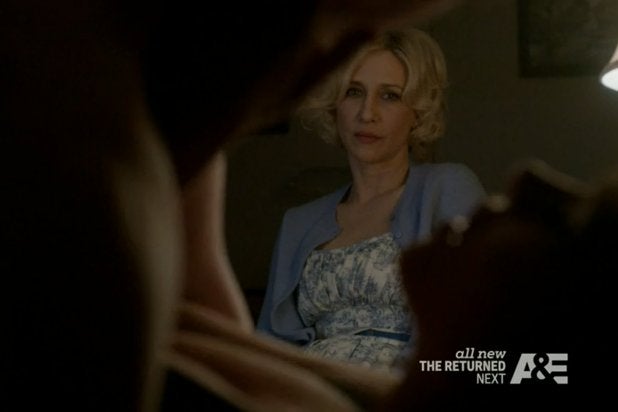 (Spoiler alert: Please do not read on if you did not watch television on Monday, May 4, 2015. There be spoiler-y waters ahead.)

Fox is getting a jump start on season finale season, sending Fox’s “Gotham” off with a violent hour of deadly consequences. It was a weird night of television, with penultimate episodes of oddness for “Bates Motel” — even a sexy return can’t keep Norma out of Norman’s mind — and “Castle” — even a murder can’t keep Carly Rae Jepsen from performing.

And if you’re too busy trying to untangle Klaus’ unnecessarily complicated schemes on “The Originals” to have followed any of that, not to worry. TVWrap has you covered with a look back over the wildest, craziest, funniest and buzziest moments on prime-time television for Monday, May 4, 2015.

But only two walked away … and one of those — Falcone — intends to walk right out of the criminal life altogether, leaving a new kind of victor in the Penguin, and a criminal underworld on the brink of total chaos.

Mooney took out Maroni for his lack of respect, and then Penguin took out Mooney as a means to an end — though her watery plummet foreshadows a comic book resurrection down the road. His rise from castaway to kingpin appears to be complete, but he still needs to get the now leaderless factions of the criminal underworld on board.

Penguin is a cross between a standard mob criminal, and the special brand of lunatic that will come to dominate Gotham, exemplified by Edward Nygma’s (Cory Michael Smith) mental break, a la Gollum in “The Lord of the Rings,” as he chastised himself via a separate personality for leaving a clue behind. The criminal element of Gotham is changing.

Even Barbara (Erin Richards) succumbed to the crazy of the city, admitting to Leslie Thompkins (Morena Baccarin) that she killed her own parents before trying to take out the good doctor. Poor Gordon can’t catch a break at work or at home, apparently.

Back at Wayne Manor, young Bruce (David Mazouz) made a fateful discovery, offering the first glimpse into what will become the Batcave. And yet, if this was his father’s secret, for what purpose did Thomas Wayne have a staircase heading beneath the manor?

So many questions, so much confusion. Why have Barbara go mad? Why did Maroni’s men run right past Falcone to try and kill Gordon? Why does everyone give dramatic speeches rather than just get on with the killing already. Oh right, this is a comic book series, superhero soap operas.

Just turn off your brain and enjoy the ride.

“Bates Motel” Welcomes Back the Dead

The dead returned on the latest hour of A&E’s “Bates Motel.” Bradley Martin (Nicola Peltz) returned to White Pine Bay, only to discover that you can’t go home again. So she books a room at the Bates Motel, because that’s gotta be the safest place in town, am I right?

Certainly Norman (Freddie Highmore) offers her a warm welcome, at least until his mother (Vera Farmiga) shows up to mess everything up as she always does. Except she’s not really there at all, of course.

Once again, everybody’s favorite future killer with serious mommy issues sabotages his own chance at romance by conjuring up his mother to chastise him for his lustful thoughts.

This is not the same Norman that Bradley knew when she skipped town and faked her suicide. He’s well on his way down the path of darkness, and he’s drawn to her. Sounds like a recipe for a screaming shower scene, or something similar, come next week’s sure-to-be-bloody season finale.

Sketch comedy came to ABC as the latest episode of “Castle” tackled the murder of Lorne Michaels — er, that is a fictional version of the “Saturday Night Live” creator. After the creator of “Saturday Night Tonight” was murdered, Castle and Beckett were on the case, and on the set for interactions with the cast — Jaleel White with a puppet! — and the week’s celebrity guest and musical act, Carly Rae Jepsen.

In the middle of their investigation, Castle and Beckett stopped to watch Jepsen perform. And so we got to see it, only not from their vantage point but with full camera work to spotlight the artist. They even broke into dance offstage while she performed.

She served no purpose to the plot whatsoever so why. Was. She. There? Seriously. Stop it.

All Kinds of Baby Drama on “The Originals”

The CW’s “Vampire Diaries” spinoff was up to its usual tricks this week. The latest episode featured not one, but two overly convoluted plots. One designed to take down evil witch Dahlia, while the other was one of Klaus’ (Joseph Morgan) usual tricks that make him look like he’s gone pure evil until the end of the hour when we get the twist. It’s like M. Night Shyamalan is behind every major plot development on this show.

The first plot is intended to make Dahlia mortal long enough to kill her, but that one backfires thanks to Klaus. He then kills Gia, but it’s okay. He has a plan. So Elijah really just needs to get over the fact that his brother keeps killing those he cares about, because he has a plan. So it’s all gonna be okay. You know, for Klaus.

Speaking of Mikaelson plans, it looks like original flavor Rebekah is coming back, as mortal Rebekah 2.0 (Maisie Richardson-Sellers) figured out that the only way to stop Marcel from killing her — as a result of Klaus’ compulsion — was to kill her mortal body and wake back up in her original body aka the one that looks like Claire Holt.

So welcome back to the “Vampire Diaries” universe, Ms. Holt. Sticking around this time?