Forks, a tiny town of 3,000 nestled in Washington’s Olympic Peninsula, has been christened by the people who live in this rainswept region the "logging capital of the world." But a town best known for its timber and trout fishing has in recent years become famous for something beside its gloomy weather — vampires.

Stephenie Meyer ‘s decision to set the "Twilight" saga in this sleepy hamlet — the latest in the franchise, "New Moon," opens on Friday — has meant big business for an economically depressed area. Taking advantage of the newfound notoriety, however, is not without its risks, as local businesses flirt with copyright infringement every time they invoke the franchise.

Where once a mere 8,000 people found their way each year to a place so remote that elk idle on its airstrip, Forks now attracts more than 67,000 tourists annually. They come to retrace the steps of Bella, the book’s lovelorn heroine; her befanged lover, Edward; and his vulpine rival for Bella’s affections, Jacob (who later becomes a werewolf). 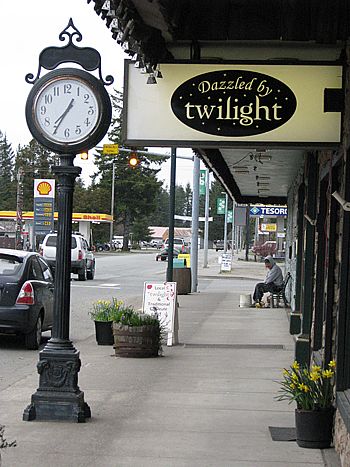 se hoping to see the atmospheric, mist-infused setting of the 2008 film "Twilight" and its soon-to-open sequel "New Moon" will be disappointed: Those movies were filmed primarily outside of Portland, Oregon.

Still, there’s plenty here to appeal to the "Twilight" faithful. "Twilight" bus tours take visitors to sites mentioned in the books, with a stop for a meal at Three Rivers Resort, which marks the treaty line the novel’s vampires are forbidden to breach. "Twilight" souvenir stores line the town’s main street, hawking everything from plastic fangs to Robert Pattinson posters. There’s even a lounge that caters to "Twilight"-themed weddings and events.

In light of the newfound mania for all things Forks, the director of the town’s Chamber of Commerce has become accustomed to answering questions as seemingly lunatic as where the best camping spots are to avoid vampire attacks.

Forks (pictured above) recently made national news when it was announced that plans were under way for a "Twilight"-themed restaurant in the heart of downtown with the working name of Volterra, presumably a reference to the Italian city where a coven of vampires in the second book reside.

"It’s been a wonderful thing," said Marcia Bingham, director of the Forks Chamber of Commerce. "There were all these empty storefronts that are filling up with ‘Twilight’ stores. Tourism has taken off here, and when the next movie opens we’re expecting it to get inflated again."

But for Summit Entertainment, the studio  that produces the "Twilight" movies, the town of Forks presents a challenge.

The company does not want to be seen as cracking down on a town that has been hard-hit by the economic downturn. And it does not want to alienate fans by suing those who feed their passion for "Twilight."

On the other hand — Summit also can’t be seen as failing to protect its own intellectual property. 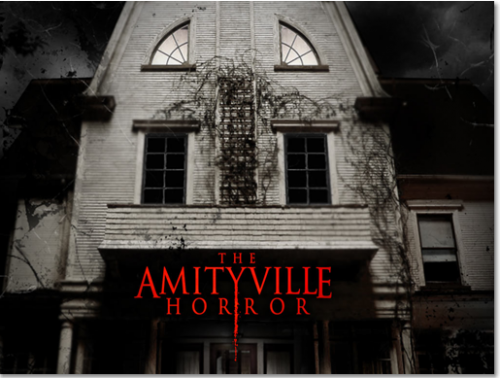 "These franchises present a delicate balancing act where companies want to enforce copyright, preserve the right for sequels and derivative product, and create ancillary products that turn a profit, but they don’t want to be over-enforcing rights to the point where it creates a backlash among fans," said John Tehranian, an intellectual property and entertainment lawyer with One LLP in California.

For the most part, Summit has handled Forks with caution. Residents of the town told TheWrap that a lawyer had visited to make sure the various stores were complying with copyright laws. Summit said there was no record of a visit taking place on its behalf.

Though the studio has engaged in a handful of suits against individuals and businesses it felt were profiting from trademarked material or using "Twilight" in a disparaging way, entertainment lawyers said the studio has not been as litigious as the creators of other fanboy favorites, such as J.K. Rowling and George Lucas, who have taken frequent legal action to prevent everything from unauthorized fan fiction to film parodies.

Summit declined to specifically address the case of Forks, but thus far the only threat of litigation there came not from Summit, but from a Seattle Italian restaurant that owned the rights to the name Volterra. The restaurant’s owner, Annette Root, said she is planning to name her eatery the Lodge in Forks, a reference to the name of the place where Bella eats after her high school graduation. 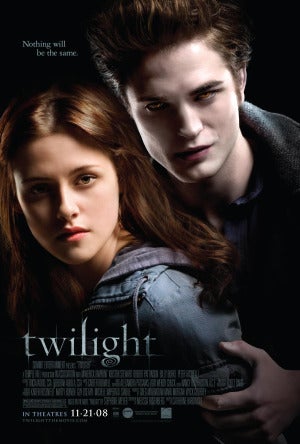 “The fans of the ‘Twilight’ saga films are an integral and appreciated part of the franchise," a Summit representative said. "Whenever possible, the studio seeks to allow fans to express their interest in all things ‘Twilight,’ and we only look to try to exercise legal rights when copyrighted and trademarked material is used in an inappropriate manner or when an individual or organization infringes on rights granted to a licensee of Summit.”

But Summit has made certain moves over the past year to further protect the franchise, trademarking the terms "Team Edward" and "Team Jacob," phrases originally coined by fans to show allegiance to one or the other of Bella’s suitors.

And in an effort to control the spread of T-shirts and other products related to the films and books, Summit announced a partnership with CafePress, a website that allows fans to design their own "Twilight" merchandise.

Though the Forks situation may be somewhat unprecedented, the ubiquity of for-profit fan sites is not unique to "Twilight." The books’ success has spawned a series of websites and stores that sell products derived from the movie and trade in "Twilight" gossip and set leaks. Many of them also accept paid advertising.

"The majority of the fan sites which I see don’t do it for the money," said New York entertainment lawyer John J. Tormey III. "The ones that do are clearly in a different category in the eyes of the [intellectual property] holders, and are the ones that would get sued first-in-time if infringements were taking place. If you’re making money off of copyright-protected property owned by another, your ‘business’ is probably on borrowed time."

As for the town residents, themselves, they say that they are at great pains not to violate any laws.

"I’ve consulted lawyers and trademark attorney," said Root, who also owns a store called Dazzled By Twilight that sells merchandise inspired by the books and movies. "I’m sure we’ve made blunders, but we try to be diligent. It’s hard to always know the right thing, but I’m so respectful of Stephanie Meyer and her books that I wouldn’t want to take advantage."

But legal experts say the mere use of the "Twilight" name for profit potentially puts these businesses at risk, even if the stores in question deal only in trademarked merchandise.

"There is a widespread misperception about copyright infringement and what is ‘fair use,’" said Peter Afrasiabi, a lawyer with One LLP. "In my experience, the public’s perception differs radically and often from what the law says. People are often stunned to find themselves in legal trouble."

Tourism has been a boon for the townspeople of Forks, but many say that the best aspect of the "Twilight" phenomenon is that it’s encouraged interest in a part of the country that is beautiful, but largely unknown. They feel that they are helping to stoke enthusiasm for the series and getting to share in the excitement of a franchise that is helping to reivigorate an economically downtrodden part of the country.

"All the ‘Twilight’ folks have been lovely people," said Diana Haag, who has renamed two properties she rents in Forks the Twilight-Eclipse cabin and New Moon-Breaking Dawn cottage. "So many of the people who have made the trip wrote afterward and thanked me so very much, for letting them make their dream come true. It makes you feel good about what you’re doing."

For a slideshow of other towns made famous on film, click here.