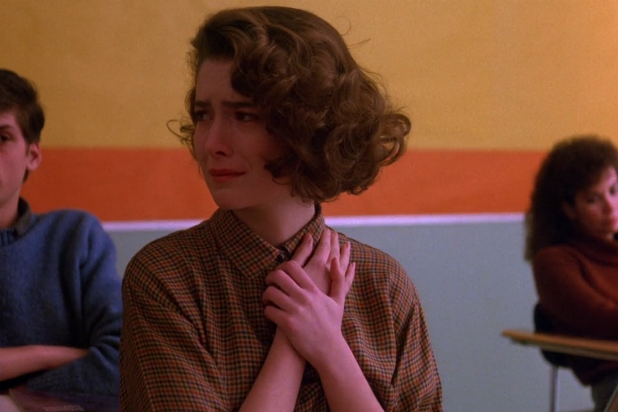 There are some notable omissions from the 217 names on the cast list for Showtime’s “Twin Peaks” revival, including Heather Graham (who played Annie Blackburn) and Piper Laurie (Catherine Martell). But the most noticeable absence may be that of Lara Flynn Boyle.

Boyle played the good-hearted best friend of Laura Palmer (Sheryl Lee). And while her omission from the giant cast list is disappointing, it isn’t a huge surprise.

Boyle was famously recast in the “Twin Peaks” prequel film “Fire Walk With Me” — in which the role of Donna was played by Moira Kelly, who is also not appearing in the revival, as far as we know. Nobody’s said conclusively why Boyle didn’t appear in the film, or why Donna — who is one of the most important characters in the series — isn’t appearing in the new season. But there are some theories.

Multiple cast members, including Boyle herself, have cited reasons stemming from “scheduling conflicts” to interpersonal conflicts between Boyle, some of the other actors, and creator David Lynch.

Sherilyn Fenn, who played high school student Audrey Horne, has said repeatedly how disappointed she was that her character didn’t end up in a romantic relationship with FBI Agent Dale Cooper (Kyle MacLachlan). Both are returning for the Showtime series.

The story, as Fenn tells it, was that there wasn’t supposed to be anything between them, but there was enough on-screen chemistry to make the writers consider making something happening between the two.

That possibility faded with the introduction of Graham’s Annie, who became Cooper’s love interest in Season 2. Fenn puts a lot of the blame on Boyle, who was dating MacLachlan at the time and didn’t like the idea of Fenn’s character getting involved with Cooper.

“So his girlfriend, Lara Flynn Boyle, kiboshes an astonishing thing… I remember saying, ‘David, is this how it goes? An actor complains, because she’s the girlfriend, and then you change?'” she said on the “Twin Peaks Unwrapped” podcast.

“Now, Kyle will admit the truth. Then, he wouldn’t. At the time, he was saying, ‘No, her character is too young for me’,” she continued. (Audrey was supposed to be in high school, but Fenn was in her early 20s when she was on the show.) “Meanwhile he is with a girlfriend, I’m 24, 25, his girlfriend is 19. And they bring in Heather, who’s younger, so… whatever.”

The show introduced Billy Zane as Audrey’s love interest, John Justice Wheeler, in Season 2. Fenn she adored the actor — but not the storyline. In an A.V. Club interview, she cited Boyle as the reason for the development.

“Literally, because of that, they brought in Heather Graham — who’s younger than I am — for him and Billy Zane for me. I was not happy about it. It was stupid.”

Donna was an important part of “Fire Walk With Me,” a prequel that arrived in theaters in 1992, after “Twin Peaks” was canceled. It’s not clear why Boyle didn’t return.

Also Read: From 'Riverdale' to 'X-Files': 14 Shows We Wouldn't Have Without 'Twin Peaks' (Photos)

The running story is that she had scheduling conflicts (most likely because of “Wayne’s World”). But it also sparked speculation about whether she didn’t want to work with MacLachlan after they broke up.

Boyle appeared in several films after “Twin Peaks,” including “Men in Black II,” and her TV work included a long run on “The Practice” from 1997 to 2003. She has most recently appeared in independent films.

It’s possible Donna may not be appearing in the new series because there’s no need for her. Her storyline with James Hurley hit a dead end after he left on his motorcyle, and attempts to weave her in with the other residents of the town — including introducing questions about her birth parents — didn’t go anywhere. It’s possible that in the end, Donna just didn’t fit in.

Also, as Lynch has made clear in his previous films and in interviews, nothing is at it seems in “Twin Peaks.” Who knows what will happen to Donna?