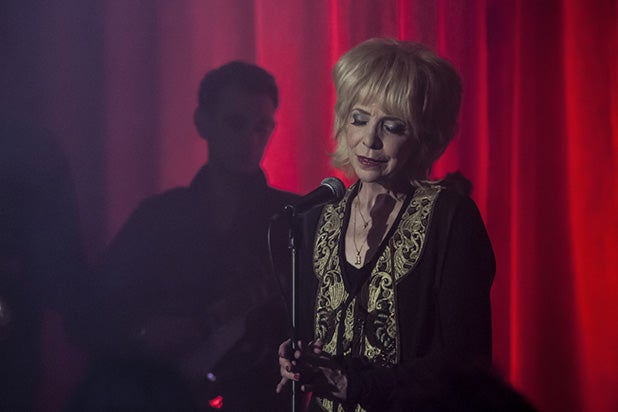 “Twin Peaks: The Return” was as much about the musical acts as it was about the returning actors or Agent Dale Cooper. This included performances from Eddie Vedder, Trent Reznor and of course, Julee Cruise, who sang “Falling,” the theme song for the show and was a longtime David Lynch collaborator.

However, after her appearance on Part 17 on Sunday, where she performed “The World Spins,” a song made famous by the original show, Cruise had some choice words for Lynch and the show, which she called a “slap in the face.”

“I’m done… and I could care less about TP,” the singer wrote on Facebook. “My subconscious never lies… I have my answer now of what I will do with the rest of my life!”

In the comments, she explained that her complaints revolve around her performance, which she said was cut short. Cruise said that she had to be convinced to join the show after trying to “hide” (she even changed her number in order to not be reached), although she still only had four days notice. She referred to Lynch as an “Emperor” and said she was treated like trash.

While Cruise referred to a lot more going on behind the scenes, including the aforementioned treatment, she didn’t go into details. She does mention some “legal battles,” however, and said that she was treated poorly on set.

Her biggest overall complaint though was about the final look of the scene, which she said was too short and was done “sloppy.”

A Los Angeles Times interview with Cruise, conducted before the finale aired but posted Monday morning, has the singer talk about her collaboration with Lynch and composer Angelo Badalamenti, and how her career took off after being featured in the original show. In it, she speaks highly of the director.

Cruise, however, even after seeing the finale and feeling slighted, said she wouldn’t change a thing.

I'm done. 😊and I could care Less about TP My subconscious never lies……I have my answer now of what I will do with the rest of my life!