In her spare time, TheWrap news editor Rosemary Rossi analyzes dreams. Here is her interpretation of the first four episodes of “Twin Peaks.”

What if “Twin Peaks” is really just the story of a man with Dissociative Identity Disorder ?

Sorry to dive in so fast. But that’s my operating theory about what “Twin Peaks” means after analyzing the dream sequences of the first four episodes of Showtime’s “Twin Peaks” revival, and the original two seasons that air on TV.

Actually, I think every sequence on “Twin Peaks” may be a dream sequence. And yes, I’m aware that It Was All a Dream is the trope-iest of TV tropes. But Lynch’s whole series has been a gorgeous sendup and homage of past TV melodramas — so it would be pretty on the nose if the entire show turns out to be Cooper’s dream, and if his dreams are his way of repairing his torn-apart psyche. 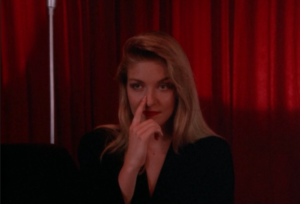 Now, stay with me here. Let’s start with the first four episodes of the revival. One very important thing to point out before we begin: one of the opening shots of the series is in the hallway of an empty school.

Right off the bat, the audience is being told that we’re about to learn something. But what? In the words of the Man From Another Place, let’s rock.

The Red Room and the Zig-Zag Floor

Set up: In a short black-and-white sequence, Cooper appears in the red room that was seen prominently in the original “Twin Peaks.” There, a giant speaks to him. The room switches to color and Laura Palmer walks in. She reaches up to her face and removes it, showing that she is glowing from within. “I am dead, but I live,” she says. She walks up to Cooper, kisses him and whispers in his ear. Wind whips behind the drapes and she is sucked up and out of the room as she lets out a terrifying scream. The drapes part, and behind them is nothing but darkness and a single white horse.
Dream analysis: The giant symbolizes the authoritarian side of Cooper, and the black and white suggests that the answer to his problem is simple. The preponderance of red curtains (which keep him hidden from the outside world and visa versa) and the labyrinth they create symbolizes Cooper staying hidden from the outside world, and the confusing, aimless maze his passion (symbolized by the red) has drawn him into. The distinctive zig zag pattern on the floor that frequently blurs and shakes represents Cooper’s foundation (his beliefs) that are not on solid ground. When Laura removes her face to reveal the light inside, it’s his psyche believing that he will only find the light and move forward through what Laura represents. Her kissing him and then vanishing with a scream is his realization that it won’t happen that way… and that he will be the White Knight in the darkness when he understands that.

Set up: Cooper is brought to an area of the red fortress where he encounters a floating brain with an attached nervous system that together resemble a tree. He is told that it is “the evolution of the arm.” (More on that later.) It tells him, “Do you remember your doppelganger? He must come in before you go out.”
Dream analysis: The arm takes us back to the One-Armed Man in the original “Twin Peaks,” and the idea that the Man From Another Place may have personified the missing arm. The brain-tree and (the whole one-arm thing) could be a symbol of the splitting of Cooper’s personalities (the separation of “twos” is again brought up when a corpse is found with one eye missing). It could also represent the idea that “one hand doesn’t know what the other is doing,” as is the case, I assume, with Cooper’s multiple personalities. The floating brain and nervous system is further signal that Cooper’s brain is detached from his body.

Also Read: 'Twin Peaks' Premiere Recap: All The Things We Learned From Parts 1 and 2

Cooper Falls into the Parallel World

Set up: After finding his way through the red maze, Cooper parts the curtains and sees his doppelganger. The brain freaks out and the floor shakes and then parts. Cooper falls through and lands on the glass box that was first seen in the cement compound. However, he’s on the outside of the compound rather than the inside. He slides through the porthole and ends up inside the glass box, inside the compound, where the show opened.
Dream analysis: Cooper wasn’t aware that his personality split. When he was given a chance to actually see that for himself, he (the brain) was disbelieving and freaked out. Cooper’s “foundation” (his beliefs) gave way and his world shifted and the ground swallowed him up.

Set up: Cooper falls and eventually lands outside a cement compound on a sort of balcony where he looks out onto calm, moving waters in the darkness. On the way down, a purple image appears that looks like someone plunging into deep water.
Dream Analysis: Colors have important meanings in dreams (for example, red representing passion), and purple is one of the most interesting. Purple is the color of spiritual healing. Water is a symbol for emotion. So falling into purple water means falling into deep, spiritual emotions. Cooper appearing inside a cement-walled balcony looking out onto moving waters, and the black sky represents him looking out into unknown emotions that still may be hidden in the darkness. But he remains separate and protected from them.

Cooper and the Blind Woman

Set up: After Cooper enters the cement building, he encounters a blind woman sitting in front of a roaring fire. Loud bangs on a metal door upset her and she shows Cooper an exit up a ladder onto the top of a metal room floating in space. There, she flips a switch, is electrocuted and falls into nothingness. Cooper steps down the ladder and back into the room, where he sees the woman, who can now see.
Dream analysis: Many believe that those who appear in your dreams are representations of your own psyche. That could be the case here. With the windowless, impenetrable building representing Cooper’s subconscious, when he’s inside himself, he is blind to all. When someone demands to be let in (could it be police interrogators or even a therapist?), he flees and is cornered, where he either falls into space or goes back “inside himself.” When he does the latter, “he” can see again.

Set up: Blue Rose is mentioned twice, once while Cooper is atop the metal room that’s floating in space and later on by the FBI’s Gordon Cole (played by series creator David Lynch).
Dream analysis: While “Twin Peaks” aficionados believe Blue Rose cases involve the supernatural, from a purely dream analysis perspective, blue symbolizes spirituality. But, on the flip side, it can also mean sadness (as in someone “having the blues”). Rose can be a symbol of pure love, or, in combination with “blue,” mean “sad, pure love.” To be even more specific, it could also represent Laura Palmer.

Also Read: 'Twin Peaks': Let's Talk About What in the World Is Going On with Dale Cooper and Dougie Jones

Dougie, the One-Armed Man and the Gold Orb

Set up: A Cooper look-alike with a problem left arm, Dougie, appears in Las Vegas. He spots a red chair in his room and hallucinates the One-Armed Man on a similar chair in the red-curtained room. The One-Armed Man says, “Someone manufactured you for a purpose, but I think that’s been fulfilled.” Dougie is instantly in the red room and sits in the chair. His left arm shrivels and disappears. His head turns into black smoke, a golden orb rises from where his head should be and, in a puff, he disappears, leaving only a floating brain, Dougie’s ring and a small gold ball bearing.
Dream analysis: It goes without saying that the One-Armed Man is “part of Dougie.” I also believe that Dougie is one of Cooper’s alternative personalities. Gold in a dream represents rewards on the positive end of the spectrum, but temptation on the negative side. The orb symbolizes one’s subconscious and possibly a new or sudden realization or understanding about something.

What does it all mean? To me, it means Cooper has broken apart, and the show may be about him coming together.

Of course, many questions remain.

It’s another melodramatic trope that people disassociate and form multiple personalities in response to trauma. Assuming it’s true that Cooper is dreaming everything, what problem or trauma caused his mind to split apart? Is he really an FBI agent, or did he adopt that image as a symbol of strength? Or a desire to interrogate out the truth? If my theory is correct, who is the “host personality,” the original personality from which the others were born? Is it Cooper (the representation of truth and justice), Dougie (the representation of innocence and kindness) or BOB (the representation of evil and immorality)… or are there more to come?

What if there is no “Dale Cooper,” except in the dream? Who, then, is the dreamer?