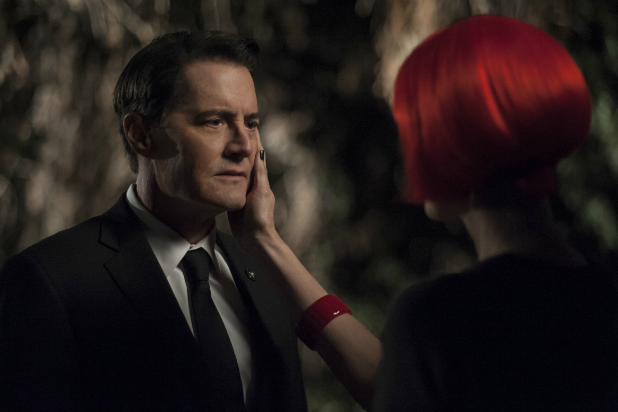 So, “Twin Peaks: The Return” aired its finale Sunday night and it wasn’t really a finale in the traditional sense. But there was never going to be one.

After a two-season run beginning in 1990 and decades of supplemental material, fans were wondering if there was really going to be a conclusion at all. Parts 16 and 17 were promising that some of the mystery of the Black Lodge, tulpas and Agent Dale Cooper would be answered.

Part 18, which aired after the tense and story-filled Part 17, is especially slow, with most of the run time padded out with shots of driving and characters sitting in silence. The last minutes can be seen as disappointing to those looking for answers after 25 years, but it was never going to be that way. “Twin Peaks” has never been about answers. Lynch’s works are always up to interpretation.

For “Twin Peaks: The Return,” mine is specifically that, as “True Detective” once said, “time is a flat circle.” Maybe Agent Cooper (Kyle Machlachlan) is stuck in an eternal loop, failing to save Laura Palmer (Sheryl Lee) over and over again. It’s why when we gets to her at the end of Part 17 she disappears with a scream and why at the very end of Part 18 he’s back to the start. But why? Why does Cooper — perfect coffee-drinking angel Dale Cooper — never get his happy ending?

He seems to go back to the day before Laura’s murder at the end of Part 17. He finds her, takes her by the hand and begins to walk away. In another version of events, Pete Martell never discovers her body, meaning she was never murdered. However, following that Cooper finds Laura again, only this time she’s Carrie Page, not Laura Palmer. They drive up to her old house in Twin Peaks and knock on the door, only to find that Sarah Palmer never lived there. Did Laura ever exist at all?

But we know there’s a connection with this new version of reality and the version we saw in the original series. At the end, Carrie hears her father Leland distantly calling for her and she screams her iconic scream, causing the electricity to go haywire and shut down all the power, leaving the audience in perpetual blackness.

The vagueness of the ending doesn’t take into account all the questions we still have about supporting characters. What about Audrey? We never find out what happened with her. We know that she’s been experiencing a dream world and when she wakes up, she’s in a white room. But we never see the end of this. What about Becky? What about that box in New York?

Also Read: 'Twin Peaks:' Why a Certain Callback Delivered the Most Beautiful Performance So Far

It’s telling though that only a few characters get a happy ending. Norma and Ed, for example, and Nadine and Jacoby get satisfying endings to the drama. In the final two episodes, it was Janey-E and Sonny Jim. As Cooper promised, they get a Dougie Jones back, one that looks more closely like the Cooper that they grew to love throughout the season. We know that it isn’t a real person, but Dougie was never a real person either. Despite Janey’s relationship with Diane (they’re estranged half sisters), she gets closure. The idyllic family that got caught up in the events inadvertently gets a happy ending, not our hero.

Because “Twin Peaks” has never been about answers or endings. Laura Palmer’s murderer was never even meant to be revealed in the original series, but network pressure forced Lynch and Frost’s hand. The series was more about the characters and the atmosphere rather than the central mystery, which mostly worked as a plot device more than a tragic event.  Laura wasn’t even really a character until these details came to light and “Fire Walk With Me” premiered.

You can make the point that “Twin Peaks” was never going to have a proper ending because Lynch’s works — “Mulholland Drive,” “Lost Highway,” “Blue Velvet,” notably — never had clear cut wrapups. If “The Return” had a happy ending or a wrapped up story, it wouldn’t fit into his canon, but that’s too simplistic. The question is why Lynch never writes in these endings. Why Lynch goes for the surreal instead of the real goes back to his obsession with dreamlike states and his fascination with the human condition and psychology in the face of trauma.

And that’s what “The Return” does in spades. We don’t really need to find out what happened to Audrey because her being trapped in that white room or with Charlie is a symbol of her trauma following the events of the original “Twin Peaks” and what happened in between. We know that Becky’s husband, Steven, kills himself but we don’t really know what happens to her and her mother, Shelly — because as we’ve learned, abuse is also a repetitive cycle. Shelly, in the original series, was in an abusive relationship and Becky is the same.

Laura may not be Laura Palmer anymore, but she’s still a person defined by an innate darkness (as we see with the dead body in Carrie’s home in Odessa, Texas). Cooper attempts to save her from BOB — the concrete entity of evil in “Twin Peaks” — but he ultimately can’t. Because BOB is just a stand-in for evil in general and not even Cooper can defeat an abstract concept. That’s why the last shot in the series is Laura once again whispering in Cooper’s ear and why despite having time travel and supernatural forces at his disposal, things don’t really change. Or the do, but not in the way he hoped.

As Part 18 begins, Cooper is sitting in the same chair from Part 1 and has the same conversations with MIKE and the Arm, but it’s only now that MIKE’s words hold weight: “is it future or is it past?” Cooper is stuck in a loop and we just saw only one outcome. “Twin Peaks: The Return” was never going to give us the complete answer. It was only going to give us one.