As “Twin Peaks: The Return” came to a close, we got some endings — and more questions — for a lot of the characters. However, in the final moments of Part 18, we were introduced to one more new character.

In the final installment, Agent Cooper and Carrie Page (played by Sheryl Lee and apparently having no connection with Laura Palmer) drive to Twin Peaks, Washington, and to the old Palmer home. However, instead of Sarah Palmer answering the door, they encounter somebody named Alice Tremond — who says she bought the house from a family called the Chalfonts.

This might seem like another character addition, but the name means a lot to “Twin Peaks” fans and the callback adds credence to one interpretation of the show’s ending.

The original Mrs. Tremond and her grandson — who you’ll remember from season 2 of the original series as well as from “Fire Walk With Me” — were Black Lodge spirits, or at least had some connection with the otherworldly plane. She was an elderly woman, played by Frances Bay, who at one point is seen sitting in the convenience store with BOB and a number of other characters.

Originally though, she was just a woman living in Twin Peaks with her grandson, who goes unnamed but wears a tuxedo. In the original series, Donna Hayward makes a Meals on Wheels delivery to her (it used to be Laura’s route before her murder).

In a memorable scene that only makes more sense the more you learn about the lore of the Black Lodge, her meal comes with creamed corn, which she didn’t ask for. Her grandson snaps his fingers and it appears in his hands. She’s also the one who tells Donna to visit Harold Smith, which then reveals Laura’s secret diary. 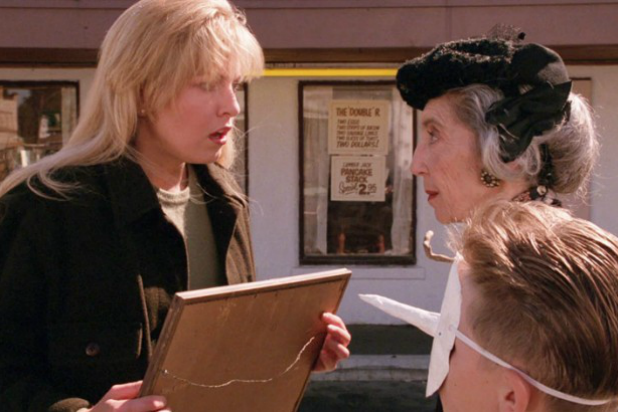 Fire Walk With Me

However, she also lived in the Fat Trout Trailer Park with her grandson, as seen in “Fire Walk With Me,” but here they went by the last name Chalfont — the same name as the family who Alice Tremond says sold the Palmer house to her family in Part 18. After the murder of Teresa Banks, Agent Chet Desmond finds an Owl Cave ring. In the film, she’s also the one that gives Laura the painting of the open door, which plays a role later. She tells her that it’ll “look good on a wall.”

We’re not sure what this means yet, since the actress playing Alice Tremond in Part 18 is Mary Reber and as far as we’re show, she doesn’t have a grandson. She doesn’t have the last name Chalfont but tells Cooper that she and her husband bought the home from somebody with that name.

We theorize that it has to do with this alternate reality that Agent Cooper finds himself in. In this world, Laura Palmer isn’t Laura but somebody named Carrie Page. The Tremonds aren’t living in a trailer park but are living in the Palmer home, or at least what was the Palmer home.

Since we haven’t had time to take a deep dive to look for clues about what happened in Part 18 yet, we’re mostly stuck making wild guesses. Perhaps Alice could be married to the grown up grandson of Mrs. Tremond — while she’s talking to Cooper we see her consulting with an unseen person about the history of the house, and it feels meaningful whoever it was wasn’t shown. Cooper’s last line (“What year is it?”) is probably another clue: this whole situation could be happening well before or after the present as we know it.

We’ll keep digging, but for now it’s safe to assume that David Lynch tossing out the names Tremond and Chalfont in the closing moments of “Twin Peaks: The Return” is something more than just an easter egg.