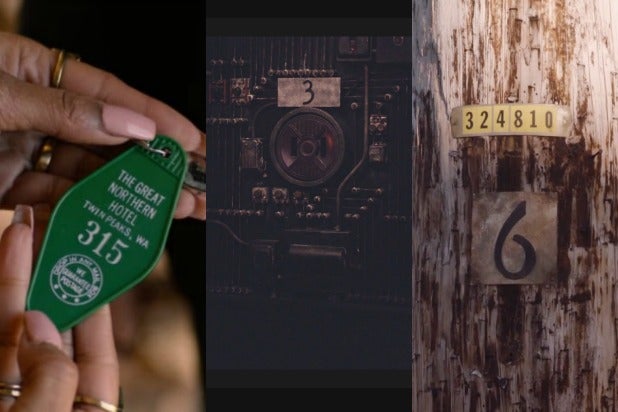 If there’s one thing we know for sure about “Twin Peaks,” it’s that nothing is done without purpose. So when we began to notice random numbers either being spoken or seen in every episode of the revival, we knew something was up. What that “something” is we’re still not quite sure just yet… and that’s what we’re here to talk through today.

With all the mysterious numbers popping up on “Twin Peaks” this season, maybe Dougie should have stepped away from the slot machines and tried his luck at Keno. From the premiere episode, when the giant told Agent Cooper “Remember 430,” to the “6” prominently displayed on a power pole near the death of a boy hit by Richard’s speeding truck, Mark Frost and David Lynch definitely have something up their sleeves. Let’s look at the numbers.

Also Read: Our Dream Expert Has Made Sense of 'Twin Peaks,' and It's Very Sad

Immediately following the opening credits in episode one, the Giant tells Agent Cooper “Remember 430. Richard and Linda.” We now know who Richard is – Richard Horne – and Linda was mentioned in episode six by a guy who rode with Carl into town. (Linda was said to be in a wheelchair now.)

But what about “430”? Thinking outside of the box in a purely surreal way, “430” is an interesting number for numerologists. “Four” is a number of harmony, balance, strength and stability, and the basis for Albert Einstein’s theory of relativity is the role of time as the fourth dimension. Again, speaking strictly from a numerology perspective, “three” is a number with deep spiritual meaning — body/soul/spirit, father/son/holy ghost (the holy trinity) and heaven/earth/waters. And “zero” is nothingness.

When you put all three together — 430 — you have a message of “fourth dimension” plus “union of body/soul/spirit” and “nothingness.” That would, indeed, be a pretty heavy message if Cooper has psychological problems, as we’ve theorized before.

Mike’s arm (aka, the nerve tree with floating brain) told Cooper in the Red Room, “253. Time and time again.” This one is simple — 2:53 is the specific time Cooper can exit the Red Room and enter another world, as was noted on a couple of wrist watches. But why that particular time? Lynch and Frost may have pulled that number out of a hat… or maybe not.

Back to numerology. “Two” is the number of gentility and humility, “five” is a high-energy, dynamic number representing motion and change, and “three” the union of ” body/soul/spirit.”

Putting that all together, could 2:53 represent Cooper’s spiritual journey from one as a gentle man to a change in which he becomes a more evolved soul?

Also Read: 'Twin Peaks': We Seem to Have Met a New Member of the Horne Family in Part 5

After falling through the zig zag floor in the Red Room, Cooper ended up in the Purple Room, where an eyeless woman warns him against a wall socket labeled “15.” Later, he re-enters that room and “15” has changed to “3.” The “15” socket was connected to the evil doppelganger’s cigarette lighter in his car, while the “3” socket was connected to Dougie’s location. Combined, you have “315,” which was his room number at The Great Northern Hotel. And that’s where the symbolism gets interesting.

Also Read: 'Twin Peaks': All the Big Questions We Have After Part 6 (Photos)

6 on the power pole

In episode six, a boy was hit by Richard’s truck and was killed at the scene. Next to the boy’s body, a power pole with the number “6” figured prominently.

Along with Cooper entering Dougie’s body via socket “3,” this has us wondering if each of these numbers represents the number of “a personality” that Cooper has taken. If that’s the case, there are at least seven and we’ve only seen three of them.

When Dougie’s car explodes, a junkie in the house across the street repeats “1-1-9! 1-1-9! 1-1-9!” The most reasonable explanation for her utterance is that she’s supposed to be screaming for help, as in “9-1-1! 9-1-1!” But why backwards? Maybe this is Agent Cooper’s life, which he’s peering at through a sort of looking glass (and, therefore, a mirror image of the reality).