Twitter has apologized to pro-Trump political commentator Candace Owens over after briefly locking the agitator and Kanye West muse out of her account over the weekend.

“Hello, we have restored your account, and we apologize for any inconvenience this may have caused. Twitter takes reports of violations of the Twitter Rules very seriously. After reviewing your account, it looks like we made an error,” said the company in a brief statement to Owens on Sunday — which she promptly shared to her more than 600,000 followers.

“BLOWN AWAY by the amount of patriots that just came to my side to make this happen,” she said, promising more info in a periscope live stream later that today

BLOWN AWAY by the amount of patriots that just came to my side to make this happen.
I will be periscoping LIVE about this entire debacle, in 30 mins.
I am blessed to know you all. ???????? pic.twitter.com/r91vwRoVuA

The issue began over the weekend amid continuing fallout over the New York Times’ decision to hire Sarah Jeong to its editorial board despite the emergence of a number of tweets and comments she made which critics said were racist.

Owens was one of the biggest cheerleaders against Jeong and in a pair of tweets, to prove her point, repeated several of the things Jeong had written about white people, but replaced white with “black” in one case and “Jewish” in another.

The tweets about Jewish people has since been deleted, the one about black people remains live.

Black people are only fit to live underground like groveling goblins. They have stopped breeding and will all go extinct soon. I enjoy being cruel to old black women.

The above statements are from @nytimes editor @sarahjeong. I simply swapped out the word “white” for “black”. 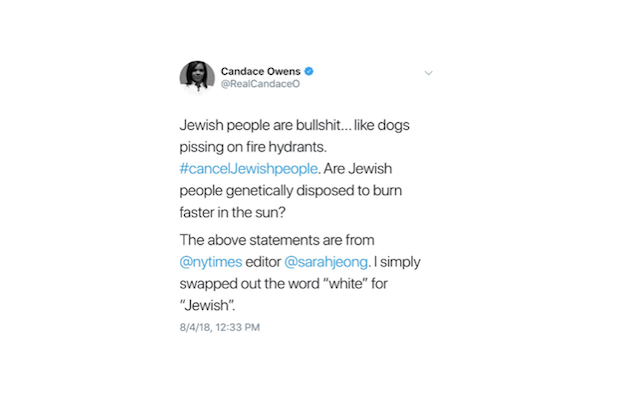 Once an obscure Democratic blogger, Owens switched allegiances after Donald Trump became president and came to wide public prominence after being singled out for praise by Kanye West in a tweet lauding her online voice.

The tweet from West turned Owens into a minor cultural icon overnight and marked the beginning of what would become a strange few weeks of tweets and media hits from the hip-hop star in April and May.