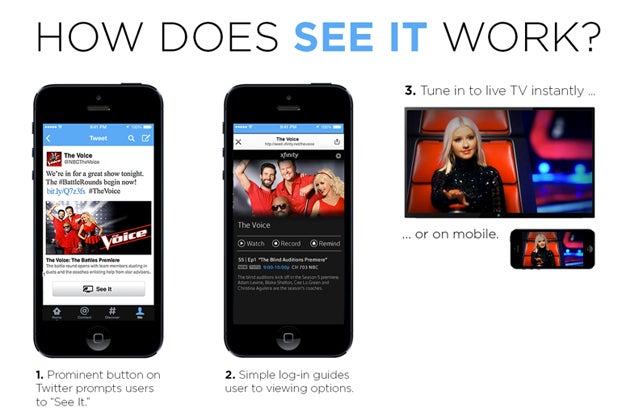 On the heels of its upcoming IPO, Twitter is delving further into the entertainment business by partnering with Comcast for a new “See It” feature that allows Comcast subscribers to watch or record TV shows mentioned in their Twitter feeds.

“Twitter is where television viewers come to talk about what they’re watching on TV when they’re watching it. Millions of users are exposed to the live conversation that unfolds on Twitter while a show is on the air and now, with ‘See It,’ they’ll be able to tune in directly from a Tweet,” said Twitter CEO Dick Costolo.

“Comcast is taking a leap forward in social TV by enabling Twitter users to more easily find and view the shows they want to watch and discover new shows.  Twitter complements the live viewing experience and is an ideal partner for Comcast and NBCUniversal,” said Comcast CEO and Chairman Brian Roberts.

Subscribers to Comcast’s Xfinity service will be able to access their TV directly from a Tweet, programming their Xfinity set-top boxes to tune into or record TV shows or access them through the mobile devices.

“See It” will debut in November across most of Comcast and NBCUniversal’s channels, including NBC, USA, Bravo and the brand-new Esquire network. Its G4 channel, which was supposed to be the new home of Esquire, does not appear to be one of them.