To dampen excitement for the first Marvel movie directed by an African-American, race-baiting users tweeted stories of being “assaulted” by “black teens,” complete with bloody pictures. Some of the accounts have anti-semitic handles or avatars of alt-right cartoon symbol Pepe the Frog. You can take a look at a few examples below: 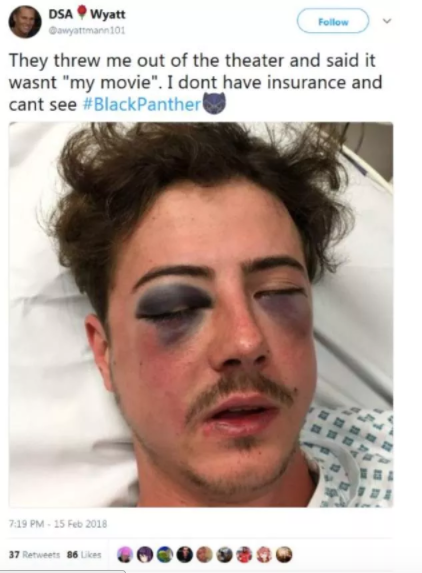 Another fake accusation (via Snopes) 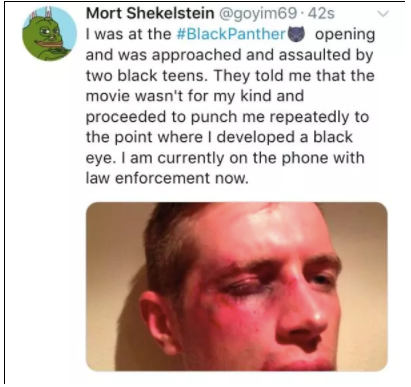 Also Read: Find Out Why 'Black Panther's' Michael B. Jordan Has to Do Push Ups for Co-Star Lupita Nyong'o

However, police departments in New York, Chicago, Los Angeles, and Houston haven’t responded to any assaults following a “Black Panther” screening, according to the Los Angeles Times. Despite the lack of evidence, the spurious accusations have racked up hundreds of retweets. One fake post grabbed 400 retweets with a picture of a bloody towel and sink — something that was quickly shown to be a Flickr image from 2009.

The account was suspended by Twitter for violating its rules — which prohibit accounts from posting “misleading, deceptive, or malicious links” — the company told TheWrap.

A Twitter spokesperson did not specify to TheWrap how many accounts have been suspended due to sham “Black Panther” attacks, or for how long. She emphasized that the social media company is not the arbiter of what is and isn’t real, but that the accounts are being suspended for a number of reasons outlined in its rules, including if tweets are “aggressive” or “malicious,” for example.

We currently don’t have a *scalable* policy or set of product features around authenticity of content. Account-level policy against impersonation is clearer and more scalable. We need to figure out a scalable and objective way rooted in durable policy to do this long-term.

And of course, since it’s Twitter, there was an equal and opposite pushback to the trolls. Users started pointing out the pictures being used weren’t tied to “Black Panther” at all.

While others just started to clown the trolls, sharing pics of celebrities like Christian Bale and Uma Thurman and saying their “friend” had been beaten up at “Black Panther.”

This is my friend Chris. He was beat up by some rowdy moviegoers at a Black Panther showing this weekend. We were told this movie AIN’T FOR MAYO FACE WHITIES. I stood by and did nothing to help my friend. pic.twitter.com/RcFruUQHeg

This is my friend Rocky. He was challenged to a boxing match after a showing of Black Panther, and he suffered brutal injuries. Please pray for him and his wife, Adrian pic.twitter.com/hB7Xd3rxMA

Also Read: Why 'Black Panther' Matters: Finally I Can Look in a Mirror and Imagine a Superhero (Guest Blog)

The haters have done little to curb excitement for the Michael B. Jordan, Chadwick Bosman-led flick, though: “Black Panther” just raced to the biggest 4-day opening in box office history, raking in $242 million in the U.S.

With ”Black Panther“ smashing through box office records, TheWrap takes a look at what’s next for the the cast of the global blockbuster