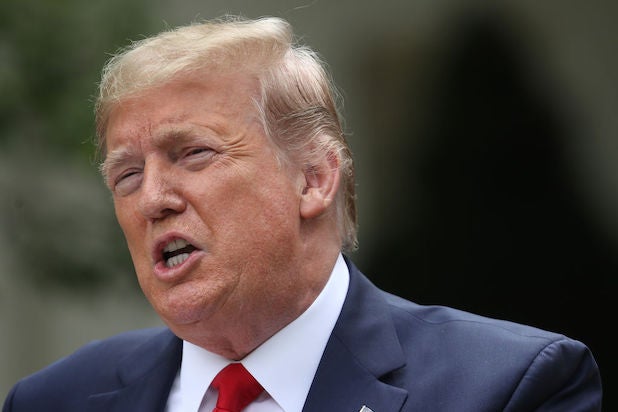 Both Twitter and Facebook on Friday deleted a parody video posted by President Trump, altered to make it look like CNN had aired a story about a white toddler chasing a Black toddler, after the two tech giants received copyright infringement claims.

The modified video — which Trump posted on Thursday night — showed a Black toddler running away from a white toddler and with a fake CNN chyron saying “Terrified Todler [sic] Runs from Racist Baby” and “Racist Baby Probably a Trump Voter.” Soon after, the video showed the two toddlers hugging and called on viewers to not believe “fake news.”

Trump shared the video created by meme maker Carpe Donktum to both Twitter and Facebook simultaneously. The parents of one of the children in the video filed the copyright claim and requested that it be pulled down.

“We received a copyright complaint from the rights holder of this video under the Digital Millennium Copyright Act and have removed the post,” a Facebook rep told TheWrap.

A Twitter rep told TheWrap it took action against Trump’s video for the same reason.

On Friday afternoon, Jukin Media — a company that represents a parent of one of the toddlers who owns the rights to the video — released a statement saying it had not given Trump “permission to post the video.”

“We believe this his unauthorized usage of the content is a clear example of copyright infringement without valid fair use or defense,” the company said. “Separately, in no way do we support or condone the manipulated video or the message it conveys.”

Before Trump’s video was taken down, Twitter had slapped a “manipulated media” label on it, just in case it wasn’t clear that it was an altered clip.

The president has increasingly found himself in Silicon Valley’s crosshairs of late. On Thursday, Facebook removed a post from Trump’s campaign because it included a red triangle, which had been used as a symbol for political prisoners in Nazi Germany. Trump’s campaign staff vehemently pushed back, telling TheWrap the triangle symbolized Antifa.