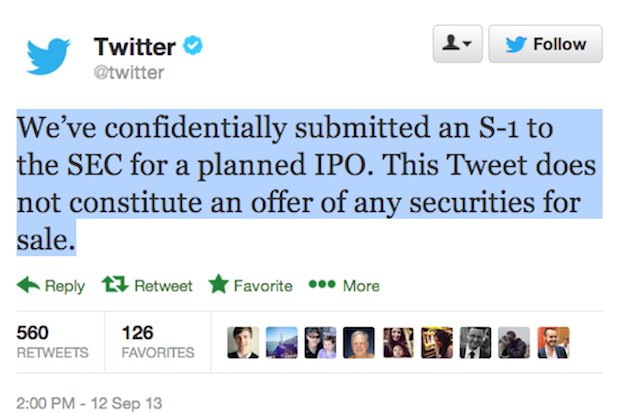 “We’ve confidentially submitted an S-1 to the SEC for a planned IPO,” the post read. “This Tweet does not constitute an offer of any securities for sale.”

Because Twitter filed the form in private, it is not available for reporters or investors to access. The JOBS Act, signed into law last year, permits companies to go public without releasing certain documents so long as they generate less than $1 billion in revenue. This means Twitter falls in that camp.

The company is valued at around $10 billion based on a recent filing by investor GSV Capital.

That Twitter would go public and open itself up to investors was inevitable and the source of much speculation over the past few years. Companies agonize over when it is the right time to file, balancing the need to reward investors and employees with the security of a stable business.

Facebook, a social media giant that went public in May 2012, struggled out of the gate as investors questioned whether it was ready for a world in which suers were increasingly accessing the Internet via mobile devices.

Though the company had established sources of revenue, it was not generating much from mobile platforms. Yet Facebook has since rebounded, and its stock hit new highs this week.

Twitter, founded by Jack Dorsey in 2006, has methodically built its business over the years, portraying itself an essential tool for brands, the entertainment industry — and social activists. It began as a social messaging platform with no source of revenue, and now boasts more than 200 million users.