Twitter was hit by a very widespread outage Thursday that lasted nearly 2 hours, as all tweets disappeared from view and users found themselves suddenly unable to interact with any of the platform’s features.

“We have no evidence of a security breach or hack, and we’re currently investigating internal causes,” Twitter said in a statement around 3:45 p.m. Pacific, more than an hour after the outage began.

Problems with the site began around 2:30 p.m., with the glitch first affecting the notification screen so it appeared to existing Twitter users as if they were new to the site and had no prior activity in their mentions.

Shortly after this was noted, users lost the ability to send tweets — attempts to test the function were met with a “something went wrong” error message. Direct messages appear to be down as well — the message screen will show existing chats as usual, but when a user clicks on the chats there is no content and the message history isn’t accessible. Some users experienced problems sending direct messages as well. 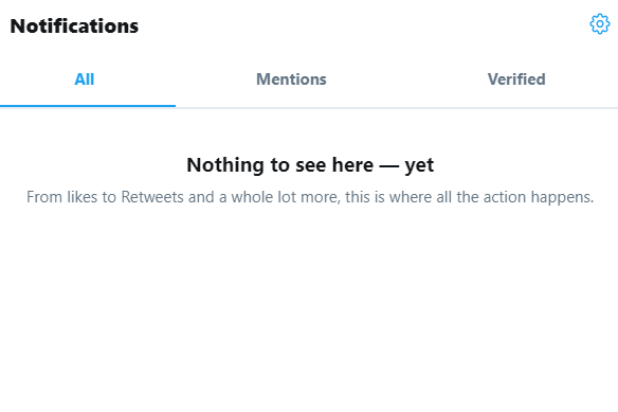 Reports of the outage on Twitter spiked on the website activity tracker DownDetector around 2 p.m. As of 2:47 p.m. on Thursday, there were 57,213 outage reports filed on DownDetector.

The Twitter home feed was also compromised Thursday afternoon, and users who logged in were met with another error message. The problem was first noted on the desktop version of the site but every version seems to be affected.

Approximately 30 minutes after the outage began, tweets reappeared on the platform’s homepage, though the most recent were timestamped at 2:35 p.m. PT. As of 3:00 PT, direct messages and notifications remain affected, tweeting remains disabled, and no tweets timestamped later than 2:35 have appeared. In addition, when attempting to retweet something, users received a message “Twitter is over capacity.”