“After close review of recent Tweets from the @realDonaldTrump account and the context around them we have permanently suspended the account due to the risk of further incitement of violence,” Twitter said on Friday.

“Our public interest framework exists to enable the public to hear from elected officials and world leaders directly. It is built on a principle that the people have a right to hold power to account in the open,” the company continued. “However, we made it clear going back years that these accounts are not above our rules and cannot use Twitter to incite violence. We will continue to be transparent around our policies and their enforcement.”

Twitter said two of Trump’s tweets on Friday violated their glorification of violence policy and that “plans for future armed protests have already begun proliferating on and off-Twitter,” including another proposed attack on the U.S. Capitol and other state capitol buildings on Jan. 17.

The tweets in question said, “The 75,000,000 great American Patriots who voted for me, AMERICA FIRST, and MAKE AMERICA GREAT AGAIN, will have a GIANT VOICE long into the future. They will not be disrespected or treated unfairly in any way, shape or form!!!” and “To all of those who have asked, I will not be going to the Inauguration on January 20th.”

“President Trump’s statement that he will not be attending the Inauguration is being received by a number of his supporters as further confirmation that the election was not legitimate and is seen as him disavowing his previous claim made via two Tweets (1, 2) by his Deputy Chief of Staff, Dan Scavino, that there would be an ‘orderly transition’ on January 20th,” Twitter said in the blog post. “The second Tweet may also serve as encouragement to those potentially considering violent acts that the Inauguration would be a ‘safe’ target, as he will not be attending.”

“The use of the words ‘American Patriots’ to describe some of his supporters is also being interpreted as support for those committing violent acts at the US Capitol,” Twitter also said. “The mention of his supporters having a ‘GIANT VOICE long into the future’ and that ‘They will not be disrespected or treated unfairly in any way, shape or form!!!’ is being interpreted as further indication that President Trump does not plan to facilitate an ‘orderly transition’ and instead that he plans to continue to support, empower, and shield those who believe he won the election.” 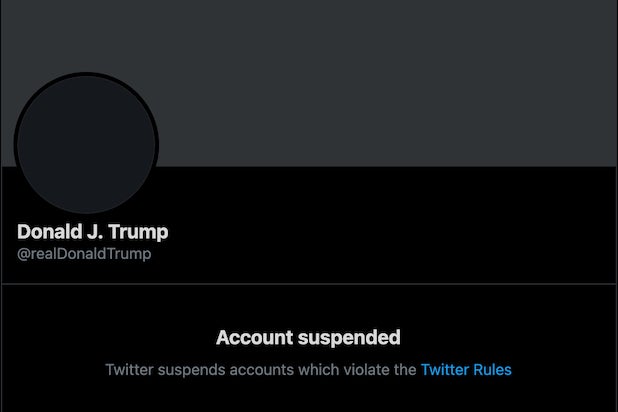 The move comes after Twitter first temporarily suspended Trump for 12 hours, beginning on Wednesday, after Trump incited a riot at the U.S. Capitol. At the time, the company threatened to permanently ban Trump if he violated future Twitter policies.

Shortly after, Facebook followed suit and said Trump would be blocked from posting to his page for 24 hours on Wednesday. The following morning, Facebook chief Mark Zuckerberg said that Trump’s block would continue “indefinitely,” calling the risks of allowing him to post “simply too great.”

Though critics have been calling on tech platforms like Twitter and Facebook to permanently ban Trump for years, the pressure has been mounting against these companies to take action after this week’s violence at the Capitol.

“Now is the time for Silicon Valley companies to stop enabling this monstrous behavior — and go even further than they have already by permanently banning this man from their platforms and putting in place policies to prevent their technology from being used by the nation’s leaders to fuel insurrection,” former First Lady Michelle Obama said in a statement on Thursday. “If we are to have any hope of improving this nation, now is the time for swift and serious consequences for the failure of leadership that led to (Wednesday’s) shame.”

A group of about 350 Twitter employees also sent a letter to Twitter chief executive Jack Dorsey other top executives this week to demand that the company permanently suspend Trump, according to the Washington Post.

“We play an unprecedented role in civil society and the world’s eyes are upon us. Our decisions this week will cement our place in history, for better or worse,” the letter said.

After close review of recent Tweets from the @realDonaldTrump account and the context around them we have permanently suspended the account due to the risk of further incitement of violence.https://t.co/CBpE1I6j8Y