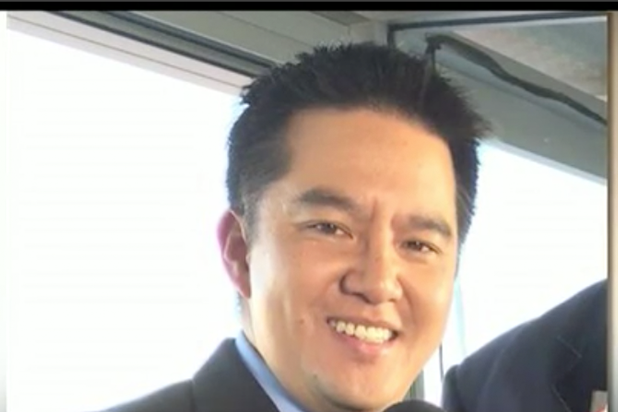 A lot of people aren’t happy with ESPN’s decision to reassign play-by-play broadcaster Robert Lee — so that he will no longer cover a football game at the University of Virginia next month because his name is similar to that of Confederate General Robert E. Lee. And they’re tweeting out their dismay.

ESPN’s Lee is Asian American, and folks on Twitter are saying the move to reassign him is racist in itself, pointing out the irony of “punishing” an American of Asian background for the sins of a white man during the Civil War. ESPN said the decision was made by both parties, but that hasn’t tempered the wrath of onlookers.

An ESPN executive told freelance journalist Yashar Ali that the move was made during the riots in Charlottesville to avoid “the reasonable possibility that because of his name he would be subjected to memes and jokes and who knows what else.”

“Think about it. Robert Lee comes to town to do a game in Charlottesville. The reaction to our switching a young, anonymous play-by-play guy for a streamed ACC game is off the charts — reasonable proof the meme/joke possibility was real,” the ESPN executive said.

Just received this email from an ESPN executive re the Robert Lee controversy. pic.twitter.com/OuBORlWO9f

Users on Twitter voiced another observation: that even if the goal was to avoid memes, the decision itself to switch Lee’s games provided its own memes and jokes.

Doctor Eugene Gu, who boasts on his Twitter profile that he is blocked by Donald Trump, redefined “irony” for the situation: “Irony /ˈīrən?”/ noun 1. Punishing an Asian-American for his last name out of fear of racism.”

Also Read: First White NFL Player Kneels During National Anthem: 'I Want to Do My Part'

“ESPN claims the #RobertLee thing was about memes, but by pulling him, they created a cat-5 meme hurricane. Smart move, idiots,” another on Twitter said.

1. Punishing an Asian-American for his last name out of fear of racism.#RobertLee

ESPN hates racism so much that they're punishing an Asian guy for having an Asian last-name. #RobertLee @espn

ESPN claims the #RobertLee thing was about memes, but by pulling him, they created a cat-5 meme hurricane.

“@espn you drank the koolaid. What the hell is wrong with you?” another user tweeted.

#RobertLee This nonsense is the result of people cowtowing in fear to the reign of terror of The Left as they do this for your own good.

@espn you drank the koolaid. What the hell is wrong with you?#RobertLee#Asian

Naughty by Nature performed at ESPN the Magazine’s athlete-packed “BODY at ESPYs” bash in Hollywood Tuesday, the night before the worldwide leader’s awards show

The "BODY at ESPYs" party took over the Avalon, just north of Hollywood and Vine on Tuesday night (July 11), making athletes and Hollywood teammates for the night.