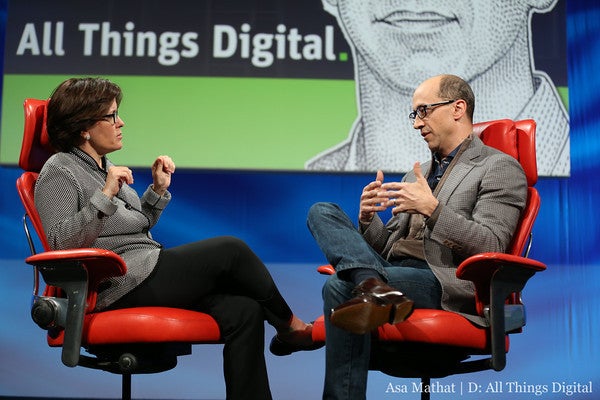 Twitter CEO Dick Costolo says his popular platform is striving to maintain its simplicity even as it grows new products, partnerships and advertising devices.

“I’m not trying to add more things into Twitter,” he said Wednesday during an interview with AllThingsD’s Kara Swisher at the site's annual conference bringing together technology leaders. “The challenge is how you pull things out of that, retaining simplicity.”

The challenge is formidable for one of the most popular social networks out there and one of the 10 most visited destinations on the Internet.

Twitter now has an estimated 200 million active users logging in at least once a month and well over 50 million active users every day, according to the company. It has recently launched new products including a music app for the iPhone and the Vine app for tweeting video and earlier this year acquired Bluefin Labs, which develops Nielsen-style analytics around social media metrics.

Costolo would not disclose company revenues, which were last estimated in 2010 at about $140 million a year, a figure surely out of date.

“Advertising is going extremely well for us,” said Costolo, without elaborating other than to say it’s “increasing dramatically.”

Twitter sells “promoted Tweets” to consumer brands, which Costolo says has been effective in a new world where brands need to engage differently with their customers.

Costolo chided Swisher when she asked if promoted tweets are “all you can offer.”

"The beauty of promoted tweets is they go out organically, and those things can be promoted to those who don’t follow them," he said.

“Think of the conversation as the canvas,” he said. “Here is an organic conversation people are having. You as brand or company can jump in and participate. Companies that do that are seeing incredible engagement with their audience.”

Earlier in the day Facebook COO Sheryl Sandberg said that the giant social platform was focused on “mobile first.” “Mobile is our big priority for next year…. Every product team is mobile first. Our revenue is mobile first,” she said.

Sandberg said Facebook was gratified by the user response to Instagram since its $1 billion acquisition; the mobile photo service has grown from 30 million to 100 million users since the social network's purchase.

Swisher asked Sandberg whether Facebook's users were getting older – if teenagers had tired of it. Sandberg said they were using other platforms too, not instead, of Facebook.

“Are teenagers not using Facebook?” Sandberg responded. “It is the case that teens and others are using other services more than before. They’re using Twitter more, they’re using Tumblr more. At the same time they continue to be very active FB users. The Pew report showed that it went from 94% to 95% in the last year. We don’t think it’s a zero sum game. Time for people to do a lot more sharing before we hit the zero sum game.”

The annual conference brings together several hundred of the leaders of technology companies from Silicon Valley.