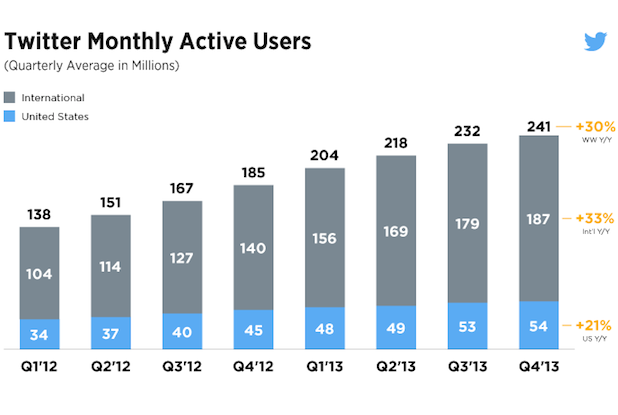 Twitter reported exceptional revenue growth in its first earnings report as a public company, posting revenue of $243 million in the fourth fiscal quarter of 2013 — more than double the amount during the same period a year ago. However, its user base grew just four percent over the prior quarter, prompting its stock to dip more than fifteen percent immediately after the report was released.

Twitter ended the year with 241 million users, which is 30 percent more than it had at the end of 2012, but not the kind of growth Wall Street had hoped for or expected. Analysts hounded Twitter CEO Dick Costolo with questions about stagnating user growth, and Costolo insisted that growth would occur organically as his team continues to facilitate interaction with new products.

“I don’t think we need to change anything about the characteristics of the platform,” Costolo said on a call with analysts. “We just need to make Twitter a better Twitter.”

Costolo listed some of the recent changes to the site he thought would help, like a feature that makes conversations between different accounts easier to track. The key, Costolo said, is making it easier for people to figure out Twitter when they first use it.

Yet the company still asid they did not expect a “significant inflection point in the user growth curve” next year, meaning growth may still be slow.

Investors, analysts, reporters and anyone with a passing interest in Twitter focuses on revenue and users, which makes this report something of a mixed bag. The revenue growth is very strong.

Also read: Facebook Turns 10: How It Became an ‘Integral’ Part of Hollywood

Twitter topped $600 million in revenue during 2013 for the first time. During this latest quarter, 75 percent of the company’s advertising revenue (which is most of the revenue) came from mobile devices.

That is what Wall Street wants to hear from Facebook, Twitter and everyone else. With most social media companies, the first step is getting the users and the second step is monetizing them. Twitter is following that game plan.

“Twitter finished a great year with our strongest financial quarter to date,” Twitter CEO Dick Costolo said in a statement. “We are the only platform that is public, real-time, conversational and widely distributed and I’m excited by the number of initiatives we have underway to further build upon the Twitter experience.”

However, the assumption is that Twitter will keep growing at a rapid clip — and that’s not happening. While Facebook now has more than 1.2 billion users, Twitter is still looking to cross 300 million.